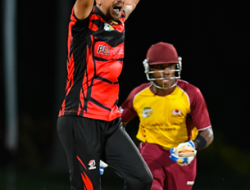 Print
Ahead of the crucial ICC meetings in Dubai, the head of FICA Tony Irish spoke to ESPNcricinfo on the scheduling challenges in cricket
1Kshares4

If structures are not put in place to ensure T20 leagues can co-exist with the three international formats, players might start to gravitate towards the more lucrative opportunities. That is the message Tony Irish, the executive chairman of FICA, will seek to emphasise at the ICC in Dubai this week.

What is your most important expectation from this round of ICC meetings?

Cricket is a successful sport already, but it has the opportunity to go to a whole new level. All of the potential exists, but we believe it needs a coherent global structure.

Much of the public discussion in recent times has been around Test cricket. Yes, safeguarding Test cricket is vital, but we are continuing to emphasise the importance of focusing on all three formats. There are three international formats to balance, and domestic Twenty20 leagues. The leagues are likely to continue to be a big part of the future of the game and can’t simply be ignored in the schedule. We are urging the game to acknowledge that and address that in this opportunity to create a better global structure now.

What do you make of where the ICC discussions are up to on international cricket?
There is clearly an acknowledgement that the bilateral system is broken, and we are hopeful that new competition structures will be agreed in all three formats in the very near future. We believe that implementing formal competition structures, and steering away from the current system of bilateral scheduling, is critical. We have had constructive dialogue on this with many of the Member Boards and ICC following the release of our International Cricket Structural Review earlier in the year. This is about thinking globally, and that is the only way to achieve a sustainable future.

There has been a lot of debate on the impact of domestic T20 leagues and how they are increasingly affecting international cricket. Players are leaning towards franchise-based tournaments steadily. What ideas have the players shared with FICA on this topic?

The success of T20 leagues is a fantastic thing for cricket and for players. Domestic leagues are going to be critical to growing cricket’s fan base in the future.

Players should not be seen as “copping out” by wanting to play in T20 leagues. Earnings opportunities are significant, but it is also important to note that many of the domestic T20 events are fantastic sporting products and players want to play in them for that reason as well. They have a clear structure and context, and players consistently tell us that playing in front of packed stadiums in the IPL, BBL, CPL etc. is a huge motivator.

It is not an inherent flaw in the character of a player to take the opportunity of playing in a great event where he is valued. These leagues are great spectacles, and it is incumbent on the international game to keep up with that, ensure it is a compelling product involving the best players, and schedule in a way that enables it to co-exist with domestic T20 leagues. If the international game doesn’t keep up, players will gravitate more and more to the leagues.

FICA does, and always has, supported international cricket. And we want it to be protected and enhanced. The discussion input and survey data we have from players around the world indicates that players still want to represent their countries. However, because the game is competing against itself (domestic T20 and international cricket scheduling overlap), and there is no coherent global structure or scheduling, players are increasingly conflicted and are forced to make a choice as to where they play. There is an opportunity to ensure that the whole landscape is the best it can be.

We believe this process is about finding a balance and a workable structure that enables the international game to survive and thrive, but also acknowledges and foresees where the game is heading and the role of domestic T20 cricket. There are lots of moving parts within that including scheduling, regulatory and contractual frameworks, economics and commercial considerations etc. At the moment most of these things are done based on individual country’s thinking. We would like that to change to global thinking.

But what about the cricket boards which say, rightly, that they have invested in the development of the player so they own some stake and have a say in where and when he plays?

There is a tendency to see the T20 leagues as completely separate from the international cricket landscape. The two can’t be simply separated. The T20 leagues are predominantly owned by the boards and offered as opportunity to the best players from around the world. The alternative market is created by the boards and they create the competition with international cricket for players.

The boards and the ICC need to take the lead in including the leagues in the overall scheduling landscape and not simply overlaying restriction in the current landscape. The fact that a board may have invested in a player also doesn’t give that board a hold over him for life, especially in the absence of a contract with a player. In any professional environment where there are choices employees have a right to exercise that choice.

The other key point connected to this debate is player workload. If players are keen to play in more than one T20 leagues, they are stretching and thus putting pressure on their bodies. The long-term effect is injuries and shortening of the player’s international shelf life. You can see some prominent players now sitting on the sidelines for a long time and picking and choosing tournaments they would like to play. How does one find a right balance?

Yes, this very definitely calls for a balance. And player workload should always be at the forefront – if the game embraces the T20 leagues as part of the overall structure then finding that balance would be simpler as one would have competing labour markets. This may mean regulating the volume of bilateral international cricket at the same time as giving it more context and meaning. This is also likely to add to the value of each international match.