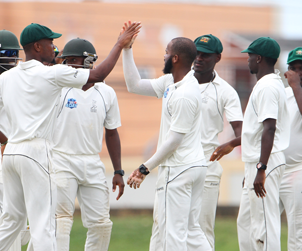 11th February 2016 Comments Off on Scorpions Aim To Keep Hurricanes On The Floor Views: 1404 News

Much will be at stake when Jamaica Scorpions play away to the Leeward Islands Hurricanes at the Sir Viv Richards Stadium in Antigua in the sixth round of the WICB First-Class Championship, starting today.

Campaigning at different ends of the points table, the Scorpions, on 53 points, will be looking to move a step closer to the top two, Guyana Jaguars and Barbados Pride.

The Jaguars, on 85 points, lead the championship, while the Pride are second on 63.

The Leewards, in the meanwhile, have lost all five fixtures to date and are lurking at the bottom on 13 points. The Windward Islands Volcanoes are fifth on 29 points, with the Trinidad and Tobago Red Force fourth on 37.

“If we want to make a run for the title, we have to start producing better results, starting with the Leewards,” stated Jamaica captain Paul Palmer Jr.

“They are down, and we need to keep them down by not only winning, but getting as much bonus points as possible.”

With a three-win, two-loss record, the Scorpions will be hoping that the addition of batsmen Jermaine Blackwood, Kirk Edwards and Shacaya Thomas will add much strength to their batting, which has struggled all season.

Blackwood missed the team’s first five matches due to West Indies duties, Edwards is making a return after missing their fifth round due to injury, while Thomas has been included for the first time this season.

“We have strengthened our batting with the addition of (Jermaine) Blackwood and the return of Kirk (Edwards), and we’re looking for better totals,” said Palmer Jr.

“This is in addition to our bowling unit, which we will be looking to for continued good showings.”

As for the Hurricanes, who will be captained for the first time by Jamaica’s Nkrumah Bonner, they are hoping that this change, as well as an extended training camp, will make them stronger.

“Jamaica is a good team, but we are playing at home and hope to use this to our advantage,” said Bonner.

“We have players with talent, but have been struggling with the basics, and if we can correct that, we should be very competitive.”