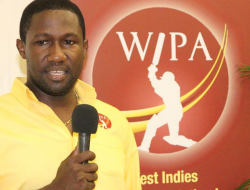 Windies look to pace against India

NELSON—Few teams loom larger in the history of the Cricket World Cup than the West Indies—winners of the first two tournaments—but the current team, under the untested captaincy of young Jason Holder, is struggling to uphold that legacy.

The West Indies were beaten by four wickets in their opening Pool B match on Monday by minnows Ireland and need a major form improvement when they play Pakistan in Christchurch on Saturday to prevent their campaign dissolving into chaos.

Monday’s loss to a non Test-playing nation is only likely to increase speculation about internal discord within the West Indies squad after contentious selections and the appointment of the 23-year-old Holder as captain.

The young fast bowler had played only 26 One-Day internationals before Monday’s clash with Ireland and faces the difficult task of securing the respect and co-operation of his senior teammates, notably Darren Sammy, whose captaincy he has usurped.

The West Indies players, including Sammy who scored 89 against Ireland, have repeatedly stated that they are a united team and all questions of selection and leadership are in the past.

But they looked disorganised and unmotivated at times on Monday and Sammy said they face an early exit from the World Cup unless they find form.

“If we continue to play like that, we won’t be here for long, for sure,” Sammy said. “So we still believe that the World Cup isn’t just one game.

“You win four out of five matches or sometimes even four out of six and then you can still get into the quarters. So, yeah, we’re not going to keep our heads down, but we still believe we could make it into the top four in this group.”

Sammy hinted at problems of motivation and focus in the loss to Ireland. While it seems unlikely any team would underestimate the Irish, who have beaten Pakistan and England at previous World Cups, Sammy suggested the West Indies lacked intensity on Monday.

“We’ve not been able to put a full game of cricket together,” he said.

“I think the batting display or partnership (between Sammy and Lendl Simmons who made 154 for the sixth wicket) should have been motivation enough for the bowlers to go out there and want to run into the Irish.

“But, look, we were lackadaisical in the field and we just fought that here. We scored 300 and we’re supposed to win.

“But you could see that Ireland is known to win those big matches and they’ve caused a few upsets in ICC events.

“Yeah, today we took them for granted as we fielded. So I can’t really pinpoint on what exactly. We just were not putting in a good game of cricket.”

Sammy said the West Indies had to rally together to revive their World Cup campaign.

“When things are not going your way it’s always difficult to motivate yourself,” he said.

“I will always try to be positive in my approach, help our young captain, Jason, and hopefully the rest of the team could follow.”