Lure of T20 could deny Windies return to greatness 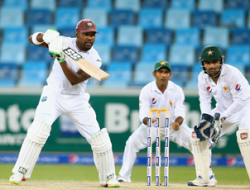 CAPTAIN of the Trinidad and Tobago Red Force Yannick Ottley says his team can bounce back against the top spin bowling attack of Guyana in the Regional Four-Day tournament, after the TT team failed to handle the leftarm orthodox of Jamaican Nikita Miller in the last round.

After four rounds, the Red Force are struggling to find consistency, only recording one win thus far. Against Jamaica Scorpions in the last round TT lost by 132 runs at Sabina Park as experienced left-arm spinner Miller snatched nine wickets for 41 runs in 22 overs in the second innings.

The Red Force will tackle Guyana with the likes of spinners Veerasammy Permaul and Gudakesh Motie in the next round starting on Friday in Guyana and Ottley is optimistic of a comeback.

“I would like to see a more collective effort, this being the last game for the first round it is for us to really end well and end on a postive note because we really have high goals for this tournament.” TT cricketers have been labelled as T20 specialists but Ottley wants to prove people wrong because his team is working hard in an effort to lift the title.

Ottley, who credited Miller for his stellar performance, said TT must capitalise and convert starts into big scores. The TT skipper said the team’s disappointing effort with the bat is not because of a lack of concentration but believes longer partnerships are required.

“I would not blame it on concentration, I think the guys have worked hard both mentally and physically so that work is there, but it is just we have not been able to put the pieces together because we are doing it in spurts.

It is just for us to have partnerships and do it as a team.” Jason Mohammed returned to the team from West Indies duty, scoring an unbeaten 91 in the first innings.

Ottley does not believe the Red Force rely on Mohammed too much but says it is important for the younger players to follow Mohammed’s lead.

“It is good to have Jason there, his experience, his seniority there as well. He led by exmaple being the senior batsman on the team so it is just for us to follow in his footsteps and hopefully we can put the pieces together against Guyana.”