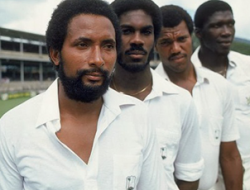 Kingston, Jamaica:- More members of the West Indies Players Association (WIPA) will benefit financially from the new Collective Bargaining Agreement signed with the West Indies Cricket Board (WICB) on September 18th in Barbados. This was the view expressed by the Player Association’s Secretary, former Jamaica opening batsman, Wayne Lewis following a meeting of WIPA’s board at their newly opened satellite office at Sabina Park on October 2nd.

“The fact that many more of our members will be placed in a position where they can earn a livable wage is now well known. More than one hundred (100) cricketers will be on retainers – with 90 being offered by the six (6) new territorial franchises and thirty (30) more being offered as central contracts by the WICB”, said Lewis.

The Secretary went on to explain how this was achieved through the sacrifice made by some of its members for the benefit of their fellow cricketers – and had high praise for the gesture.

“This is a true example of players understanding the concept of the “greater good”. Our executive made a presentation to our AGM in February, which spoke to one of the ways in which these new retainers could be funded. It involved allowing the WICB to reallocate about $2.3 million which represented amounts paid annually only to those cricketers who were selected to the senior WI team”, he said. “This amount was paid to WI senior team members for the use of their image rights during the course of each calendar year and was based on a figure of $35,000 for each day of cricket played.”

Lewis explained that during the meeting, players who were likely to be affected expressed a willingness to make the sacrifice, provided that WIPA’s executive made every effort to ensure that the shortfall in their accustomed annual earnings created by their action was made up through the negotiation of increased payments from their other revenue sources.

The newly- signed CBA / MoU has already gone a long way toward achieving this with the following increases guaranteed for players centrally contracted by the WICB:

Lewis explained that WIPA and the WICB were still looking at ways, within the terms of the new agreement, to come as close as possible to closing the shortfall and was confident that this could be achieved.

“The players who answered the call have recognized the positive impact that their action can have on the future of West Indies cricket, and we will continue to negotiate the best terms and conditions on behalf of our entire membership,” he said.