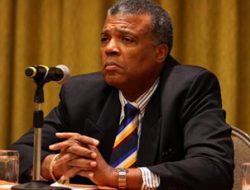 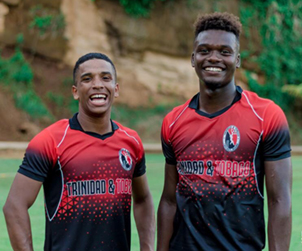 31st July 2019 Comments Off on Nail Biting Win For Trinidad And Tobago Is The Highlight From Round Two Of West Indies Rising Stars Under-19 Championship Views: 1070 News

Kingstown, St. Vincent And The Grenadines – Trinidad and Tobago’s nail biting, come-from-behind, one run victory over Jamaica was the highlight from Round two of the Rising Stars West Indies Under-19 Championship, in a rain reduced 23-over encounter at Park Hill.

At one point, the Jamaicans needed 61 to win with nine overs to go, and when they were 106/2 in the 18th over, they were seemingly cruising to victory, before quick bowler Jaydon Seales led the twin-Island Republic’s fightback.

Trinidad and Tobago coach David Furlonge, who is known around the Caribbean as head coach of Queens Park Cricket Club, was delighted at his young troops performance.

“I’m impressed with the boys fight and determination to defend that total when it seemed as if Jamaica had game won.
We still have some work to do on fielding, given we dropped a few crucial catches, but the way they gave their heart and soul in the end overrides that for now,” said Furlonge.

He continued: “We started well in game with (Leonardo) Julien’s excellent fifty, but unfortunately fell away after that.
Trinidad & Tobago and Jamaica clashes in most sports are always tense, so I am happy most of our young boys, who were experiencing it for the first time, can be on the winning team this time around.”
In the other rain-interrupted 24-over encounter at Cumberland, Windward Islands secured a comfortable win over the Leeward Islands.
While at the Arnos Vale Sports Complex, Barbados toppled defending champions Guyana. Despite losing a few wickets at the back end of their innings, the Barbados side were generally in control during their run chase, after their fast bowlers bundled the Guyanese out for a paltry 124-run total, led by an impressive five wicket haul from Matthew Forde.

Visit the Saint Vincent and the Grenadines Cricket Association Inc. tournament website for all scorecards, standings and statistics https://svgcricket.org/rising-stars-u19-2019/

At the end of the Rising Stars Under 19 Championship, 24 players will be selected to stay on for three “Best vs the Best” additional games, which Cricket West Indies will use to narrow down the West Indies U19 squad for more development activities later in the year as we build to the ICC Under-19 Cricket World Cup in South Africa in 2020.