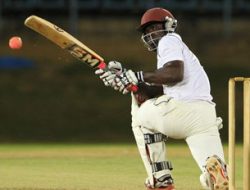 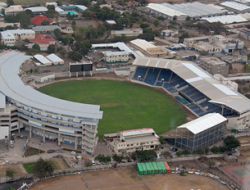 The lanky Khan snared 5-66 from 28 overs to undermine the work of Hughes, Hodge and Carty, as the Hurricanes reached 273 for six, replying to Red Force’s first innings total of 533, at the close on the rain-affected third day of the 10th round match at Warner Park.

Hughes, the big left-handed Anguillan, led the way with 71, but Khan removed Hodge for 64 and Carty for 53, as he made some telling strikes in between several stoppages for rain to put the visitors’ noses in front.

Bryan Charles however, made the breakthrough for the Red Force, after the Hurricanes starting the day on 120 without loss, and Hughes and Hodge in full command.

Charles trapped Hughes lbw inside the first hour of play, after the Hurricanes opening pair had shared 137 for the first wicket.

Hodge continued his defiance until Khan had him caught at short leg in the final hour before lunch, as the Hurricanes reached 211 for two at lunch.

Not a ball was bowled between in the scheduled afternoon period and the players had an extra 20 minutes to relax after the tea break before play resumed.

On resumption, Carty was dropped by Roshon Primus at slip off Charles and gained the runs needed from the reprieve to reach his 50.

Just when it looked like he would dig in, he was caught at mid-wicket off Khan to leave the Hurricanes 223 for three.

Khan would add Bonner caught at short leg for 16 next ball, Jermaine Otto five overs later lbw for a duck and Sherwyn Peters for a duck to a return catch four overs later in a period of instability for the home team that wobbled them to 237 for six.

Akeem Saunders, not out on 27, and Jacques Taylor, not on 23, came to their rescue and batted through the remainder of the final session to extend the innings into the final day. (CMC)