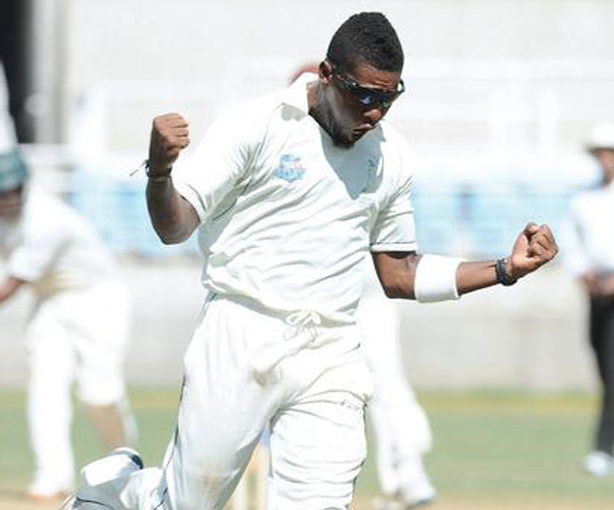 Damion Jacobs produced an outstanding spell of leg-spin bowling yesterday to propel the Jamaican franchise to a narrow 13-run win over the Windwards Volcanoes, in their opening round WICB Four-day Professional League match at Sabina Park yesterday.

Getting the ball to turn appreciably on a worn-out third-day pitch, Jacobs ended with figures of seven for 72, as the Volcanoes, set a competitive 261 for victory, were dismissed for 247.

The haul, which was the 29-year-old Jacobs’ second best in five regional first-class matches, also came on the heels of a similar performance last season when he picked up eight for 47 and two for 25 in the final of the Headley and Weakes Trophy Challenge, also against the Windwards.

Resuming the day on 148 for nine, and seeking to extend their 246-run lead, Jamaica did not get too far, with fast bowler Marquino Mindley adding another 14 runs to his overnight three, before he was the last man out with the score on 162. Jamaica made 208 in their first-inning run chase.

This resulted in the Windwards, who scored 110 runs in their first innings, needing to score seven more than they did last season when they pulled off a surprise three-wicket win over Jamaica at the same venue.

The visitors then went about the run chase in a proper manner with the experienced Devon Smith and Tyrone Theophille putting on a creditable 97 for the first wicket before the latter was dismissed caught off the bowling of Jacobs for 40.

Smith was then joined by the big-hitting André Fletcher, who after hitting two sixes, was also dismissed caught off the bowling of Jacobs for 14 to make the score 126 for two. Sunil Ambris, the 21-year-old who scored a century in the victory at the venue last season, then entered the fray, and along with the fluent Smith took the game to the Jamaicans with a flurry of delightful shots through the on- and off-sides.

However, after putting on 48 for the third wicket, Smith was removed leg before wicket by left-arm spinner Nikita Miller for a well-played 74 to leave the score at 173 for three, and the Windwards needing 88 runs for victory.

Those runs, however, proved hard to come by, as thanks to Jacobs, Jamaica were able to pick up wickets at regular intervals before dismissing last man,and man-of-the-match, left-arm spin all-rounder Alston Bobb, caught at deep mid-wicket for 39.

The 30-year-old Bobb, who claimed career-best figures of six for 45 in the first innings, and ended with a career-best match haul of 11 for 93, tried to hoist Jacobs for six, as he attempted to go for the win with last man, fast bowler Nelon Pascal, at the other end. In the end, he only succeeded to find Shacaya Thomas, who took the catch running in.

Bobbs’ dismissal sparked wild cele-brations from the players, and was applauded by the sparse crowd that was gathered.
Jamaica, with the victory, moved the top of the standings, along with the Guyana Jaguars, who defeated the Leewards Franchise by an innings and 10 runs at the Guyana National Stadium.