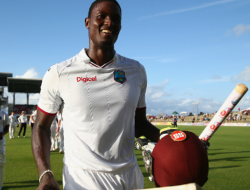 17th September 2015 Comments Off on Holder’s influence on players will be crucial Views: 2419 News

As was inevitable, Jason Holder has had the West Indies Test captaincy added to the ODI responsibility unexpectedly placed on him in January for the series in South Africa and the subsequent World Cup in Australia and New Zealand.

Holder’s record as the youngest of all West Indies captains, at 23, has now been extended to the longer, traditional version. His first assignments in his new role – two Tests in Sri Lanka next month, three in the contrasting conditions of Australia over the new year – loom as demandingly as the South Africa and World Cup campaigns did. West Indies have not won a Test, let alone a series, in either country this century.

The apparent mitigating factors, that each is in a state of rebuilding after the retirement of key, experienced players, that Sri Lanka are coming off successive defeats at home, against Pakistan and India, and that Australia are under a new captain, are negated by West Indies’ identical situation.

As was the case when Holder was first elevated as ODI captain, chief selector Clive Lloyd defended the latest decision, using much the same words. “We had a number of detractors when Holder was appointed ODI captain but he showed during the ODI series in South Africa and the World Cup that he had the qualities to take our team forward.”

For such a young cricketer, it came at a particularly awkward time, following as it did West Indies’ contentious withdrawal from the tour of India in October and the subsequent omission of Holder’s predecessor as ODI captain, Dwayne Bravo.

Lloyd said of the latest appointment that his panel, with the unanimous support of the West Indies Cricket Board, believed it was “the right time for a change”; it expected there would be “new thinking and new dynamism” under Holder.

Denesh Ramdin, 30, a veteran of 69 Tests, led the Test team for a year, over 13 Tests, from home series against New Zealand last year to the most recent, against Australia. According to Lloyd, Ramdin understood when the reasons for the switch were explained. The main issue was his recent disappointing batting form: as captain, he averaged 22, with 57 his highest score.

Yet it was clear from the beginning that Lloyd was sold on Holder to lead in both formats. He now described him as “a young man that all of the selectors, people in the Caribbean and worldwide believe has several of the qualities that can take our team forward”.

Deryck Murray, former wicketkeeper and Lloyd’s deputy during the heady days of West Indies’ domination in the 1980s, wasn’t buying it. He was concerned that it was too early to thrust Holder into the position. He was “a little bit confused” since Holder had returned from the World Cup and fit into the Test team under Ramdin for the home series against England and Australia. “I am not sure as to what is the policy,” he said.

Holder’s development as a batsman, which has bumped his average up to 34.54, allied to his controlled seam bowling that benefits from his 6ft 7 in height, has erased previous doubt about whether he was up to the allrounder’s position in the team.

The problems he is certain to face are in other crucial areas. Six of the squad of 15 for Sri Lanka are under 25; 12 overall are under 30. Only five have more than 30 Tests each to their name. It amounts to substantial inexperience.

It is the first time in 21 years and 164 Tests that West Indies are without Shivnarine Chanderpaul on an overseas tour. The selectors’ decision to end his career as the buttress of the batting, aged 41 and in declining form, has left a gaping hole in the team.

The most glaring deficiency is that of the openers. Kraigg Brathwaite has claimed the No. 1 position as his own, though his average dipped to 33.85 after low scores in the Tests against Australia. In his 22 Tests, he has had eight different partners. Of those, Chris Gayle, the most eminent, is two weeks away from his 36th birthday and suffering from a chronic back injury; he is unlikely to extend his career of 103 Tests.

Closing in on 34 and with an average of 24.50 from his 38 Tests, Devon Smith has surely played his last for West Indies. Lendl Simmons has advised head coach Phil Simmons that he is no longer interested in Test cricket; Adrian Barath, who made a debut century against Australia at 19, no longer merits a place for Trinidad and Tobago. The elegant left-hander Kieran Powell, one of nine West Indians with hundreds in each innings of a Test, has mysteriously disappeared from the game’s radar, aged 25.

The dearth of top-of-the-order contenders is starkly illustrated by the choice of Hope and Rajendra Chandrika as Brathwaite’s opening partners in the series against England and Australia.

Hope, 21, Barbados’ No. 4 or 5 in the WICB’s Professional Cricket League, was promoted for the first time in his career in successive Tests against England and Australia. He was replaced in the final match against Australia by Chandrika, who averages 24.95 in 33 first-class matches and is yet to stay long enough to compile a hundred. He marked his Test debut with 0 in each innings and yet has been retained for Sri Lanka.

Left-hander Leon Johnson, Chandrika’s fellow Guyanese, was an obvious alternative. He is not an opener by upbringing; expediency elevated him up the order for his debut Test against Bangladesh in St Lucia and three in South Africa last year. In spite of an average of 39.28, he hasn’t had a look in since.

There is one newcomer for the Sri Lanka tour. Left-arm spinner Jomel Warrican has been a consistent wicket-taker at regional level for three seasons. His 3 for 93 from 41 overs in a three-day warm-up match against the Australians in May was enough to convince the selectors of his potential.

He is the third of his kind over the last five Tests, following Sulieman Benn and Veerasammy Permaul. With the wily leggie Devendra Bishoo the only other spinner in the squad, Warrican’s role will be crucial should the pitches encourage turn.

Above all, Holder’s tactics and influence on his players are key. No captain can suddenly turn the water of a weak team into the wine of champions; it would be unrealistic to expect one without any experience of leading even at first-class level to do so with the current West Indies.

He can only be measured by the yardstick of general improvement.