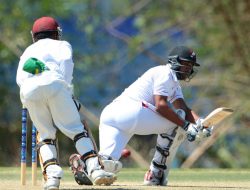 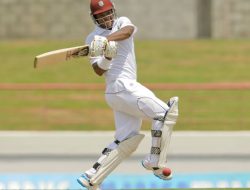 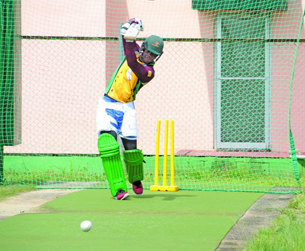 However, countryman Vishaul Singh, unbeaten on 81, and Nevisian opener Kieran Powell (58) also sent strong signals to the selectors to keep the tourists toiling all day in sunny, windy conditions on a pitch tailored for batting. Barbadian-born Guyana all-rounder Raymon Reifer was unbeaten on 36 at the close, having so far shared a sixth-wicket stand of 67 with the twinkle-toed, left-handed Singh.

Its Pakistan’s only practice game ahead of the first Test against the West Indies at Sabina Park starting Friday.

After losing the toss, the Pakistanis probably had visions of a rich wicket-taking day when opener Kyle Hope (2) fell from second ball — caught at forward short leg off the middle of the bat by Shan Masood to the left-arm pace of Mohammed Amir (2-45).

But on a pitch of even bounce and pace with the ball carrying comfortably to the ‘keeper’s gloves, the aggressive Hetmyer and the more cautious Powell quickly took control. Despite a slow outfield, the two left -handers surged to lunch at almost a run-a-minute at 119-1 with Hetmyer 77 and Powell 37.

Post-lunch, Hetmyer reached 97 with arguably the shot of the day, dancing down to elegantly drive the highly rated wrist spinner Yasir Shah (1-91) to the extra cover boundary. But three balls later he was denied his second first-class century, edging a bouncing delivery for Younis Khan at slip to take a fine catch to his right.

Hetmyer, captain of the triumphant West Indies Under-19 team at last year’s age-group ICC World Cup, had hit eleven fours and two sixes and dominated a stand of 148 for the second wicket with Powell. Hetmyer, who has developed a reputation for exciting, frustrating cameos, may not yet have fully convinced the regional selectors, but the small appreciative crowd were left in no doubt about his considerable talent.

The 27-year-old, left-handed Powell, who is hunting the job as opening partner for Kraigg Brathwaite at Sabina Park on Friday, followed shortly after Hetmyer’s demise — run out by a direct throw from cover as he wandered from his crease in quest of a non-existent single. Powell, with 21 Tests behind him, before taking a two-year break from cricket, hit five fours and a six and faced 115 balls.

Shamarh Brooks (9), captain of the President’s Eleven, battled for 47 balls before falling lbw to the left-arm spinner Mohammad Asghar (1-88) at 193-4.

That left the 28 year-old Singh — a front-runner for a West Indies middle order spot — to repair the innings with the pugnacious wicketkeeper/batsman Jahmar Hamilton (26) in a fifth-wicket partnership worth 51.

When Hamilton fell at 244-5, bowled between bat and pad by Amir from around the wicket, Pakistan probably thought they were in with a chance of batting before day’s end. But the right-handed Reifer stood firm with Singh, surviving just under five overs with the second new ball in the process.

Singh, quick to dance forward to meet the spinners, but also sound and inventive off the back foot, has so far stroked six fours and a six and faced 150 balls. He will return to the cease today with his sights set on a sixth first-class century.