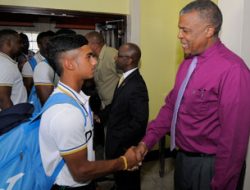 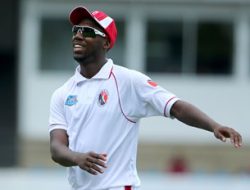 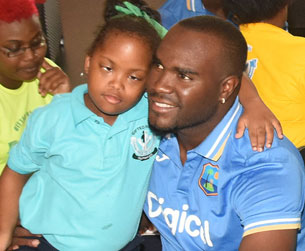 AT the Pegasus Hotel in Georgetown yesterday, children from the Gifted Hands Special Needs School spent some quality time with the West Indies cricket team, thanks to their sponsor Digicel.
“This is something that we do across the world and something that we look forward to. It’s a win-win for the children because some of the players are fathers themselves, so they know the benefit of being here and what it will mean for the children,” said Philip Spooner, Media Manager for the West Indies team.
As a main sponsor for the West Indies team, Digicel’s Communications Manager Vidya Sanichara told the media that she’s grateful for the players’ support, given their busy schedule and the rest they need ahead of their series against Pakistan.
“I know they want to win and everything, but the game itself is not everything and today (Wednesday) this shows that the West Indies players actually care.
“Digicel has been working with the Gifted Hands School for some time now, and we will continue to support them in whatever way we can. This means a world to the kids, even if it’s for a few hours,” Sanichara highlighted.