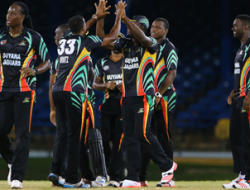 The Combined Campuses and Colleges Marooners pulled off a heist against Guyana in their Group A Nagico Super50 clash at the Queen’s Park Oval on Monday, beating their more experienced adversaries by one wicket with a ball to spare to squeeze their way into the semi-finals.

A contrast in atmosphere as compared to the previous day which saw hosts Trinidad and Tobago Red Force defeating Jamaica by 17 runs in front of a healthy turnout, the Oval was a ghost town for the humdinger between the two sides which still managed to see Guyana topping the table for a place in the last four.

Chasing 172 for victory, CCC were in tatters from the outset, with speedster Paul Wintz having Shacaya Thomas caught behind by Anthony Bramble for one, after which Chadwick Walton was run out for seven.

Then came a dubious umpiring call to exacerbate the situation, with the Marooners slumping to 39 for three. Kyle Hope was adjudged lbw to Wintz for 16, although replays showed that the ball was going over the stumps.

When Cassius Burton was plumb lbw to left-arm spinner Veerasammy Permaul, half the side was gone with 60 on the board.

Paul Palmer and Kyle Mayers brought some respectability to the innings by putting on 35 for the sixth wicket before one followed the other back to the pavilion with 95 being the score, which meant that the Marooners still needed a daunting 77 runs with three wickets in hand.

Mayers fell to Royston Crandon for 15, before Devendra Bishoo, who ended with two for 19 from his 10 overs, sent Palmer packing lbw for a workmanlike 32 off 94 balls with two hits to the fence.

When the two Powells, Christopher and Rovman, came together at 112 for eight, there was a twist in the tale. A few lusty blows from them “defanged” the Jaguars, who could do nothing but watch as the duo put on a 48-run partnership.

When Guyana skipper Christopher Barnwell introduced himself into the attack, he had Powell (Rovman) caught by Bramble for 31 off 30 balls, which meant 12 were needed from seven deliveries at that stage.

Then it came down to 11 from the last over, which was bowled by Raymon Reifer, who was Guyana’s hero against the Bajans in the previous game with a match-winning 84 not out.

But he unleashed a couple of wides which made it easier for CCC who eventually reached 173 for 9 off 49.5 overs. Powell (Christopher) hammered the penultimate delivery for four to end on an unbeaten 27 off 29 balls.

The Jaguars themselves, who chose to bat first, never made the best of starts with Trevon Griffith consuming 24 deliveries before being caught by wicket-keeper Walton for two to give Powell (Christopher) the scalp.

Reifer was then castled by Keron Cottoy for just seven after the leg-spinner got one to turn prodigiously.

The men from the South American continent were reeling at 45 for four when Powell (Rovman) picked up two wickets with his first two deliveries.

Rajindra Chandrika was bowled for a sedate 26, followed by Barnwell who was caught behind for a golden duck.

Shivnarine Chanderpaul and Crandon rebuilt the innings with a circumspect 54-run partnership before the West Indies Test player, looking to up the ante, miscued one and gave a return catch to Powell (Rovman) for a humdrum 33 off 84 deliveries.

Crandon, who top-scored with 39 from 65 balls, laced with three fours, fell in the 46th over to give Kyle Mayers the first of his two wickets.

At that stage Guyana were 122 for seven, and getting to 150 seemed iffy.

But cameos from Anthony Bramble (20 off 21 balls) and Permaul (29 not out off 15 balls), both of whom combined to hit Guyana’s four sixes during their 44-run partnership, took the Jaguars to a fighting 171 for 9 in their full quota.

In the end, however, it was not enough for the Jaguars who were given a lesson from the “Students” who proved to the powers that be that they do belong on the regional stage.