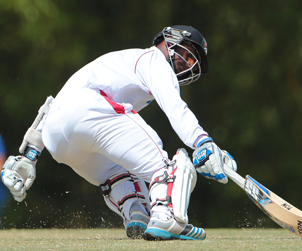 Playing at the National Cricket Stadium on Friday, Red Force were flirting with total collapse at 57 for five after being sent in, before Cariah stroked 92 and Katwaroo, 59, to steer the visitors to 250 for seven at the close.

Together, they added 114 for the sixth wicket – a partnership that saw Red Force to lunch on 63 for five and then helped them dominate the second session to be 163 for five at tea.

The left-handed Cariah was eyeing his maiden first class century when he was forced to retire hurt late in the final session. He has so far faced 197 deliveries in just over 4-1/2 hours and counted eight fours and a six.

When the partnership was broken, Khary Pierre stepped up to lend support to Cariah, hitting an unbeaten 39 off 110 balls in already over two hours at the crease. He has struck four boundaries.

Barbadian seamer Kyle Mayers was the best bowler with three for 24 while pacer Sherman Lewis weighed in with two for 48. (CMC)