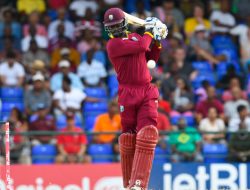 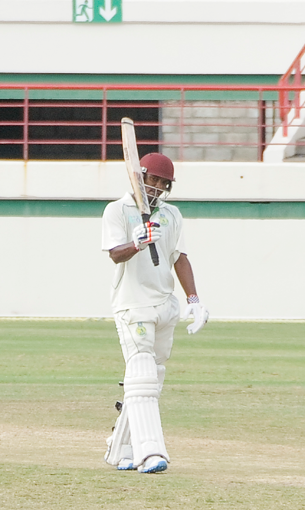 The 24-year-old right-hander, resuming from his overnight 155 not out, carved out a splendid career-best 231 as Volcanoes piled up a mammoth 540 in their first innings on day two here Saturday.

Former West Indies off-spinner Shane Shillingford then claimed three for 42 as Hurricanes stumbled and stuttered to the close on 135 for four — still 405 runs adrift with six wickets intact.

Captain and opener Kieran Powell top-scored with 49 while Keacy Carty made an attractive 35 and Jamaican Nkruman Bonner, 27 not out.

However, it was the innings of Ambris which will long be remembered. All told, the Vincentian stroke-maker faced a mere 256 deliveries in 5-1/2 hours at the crease, and struck 27 fours and five sixes.

He received support from Barbadian Kyle Mayers who smashed a lively 76 while Shillingford got 31, as Volcanoes converted their overnight 371 for six into a potentially match-winning total.

Ambris raised his landmark in the 12th over of the morning at better than a run-a-ball when he stroked left-arm spinner Jason Campbell to deep cover and sprinted a couple.

He extended his seventh wicket stand with Mayers to 173, a partnership which ensured Volcanoes dominated the first session.

When he played on to Campbell, Ambris found an ally in Shillingford and together they posted a further 60 for the eighth wicket in quick time.

Ambris was eventually last out, caught in the deep by Jeremiah Louis off off-spinner Rahkeem Cornwall, attempting yet another six.

Cornwall finished with four for 151 while Campbell picked up three for 100.

In reply, Hurricanes slipped to 36 two before Powell and Carty added 55 for the third wicket to put the innings back on track.

Powell faced 99 balls and hit seven fours but fell to a catch in the deep after attempting to go over the top with Shillingford.