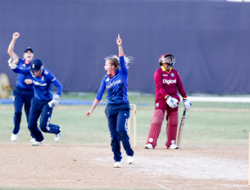 Bravo was unbeaten at stumps on 73 off 178 deliveries, having anchored the side through his partnerships with Brathwaite and Shai Hope (58 for the third wicket). He struck 12 fours and two sixes, while Brathwaite, who scored 55 off 131 deliveries, struck four fours before he was dismissed. Leon Johnson was the only other West Indian batsman to be dismissed on the day, falling to Ahmed Jamal for 11.

Earlier, PCB Patrons XI resumed from an overnight score of 241 for 5 and went on to hit 67 runs off nearly 14 overs before being bowled out for 308. Adnan Akmal, who was unbeaten on 26 overnight, took the lead, scoring 69 off 67 balls with 10 fours. He had support from Asif Zakir as the pair stretched their overnight partnership of 34 runs to 85 before the stand was broken by Devendra Bishoo. The pair scored at a rate of 4.81 and were eventually dismissed in successive overs with the total close to 300. Bishoo, who had taken three wickets on the first day, completed his five-for and conceded 107 runs, while Holder took the remaining three wickets on the second day.