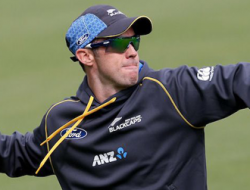 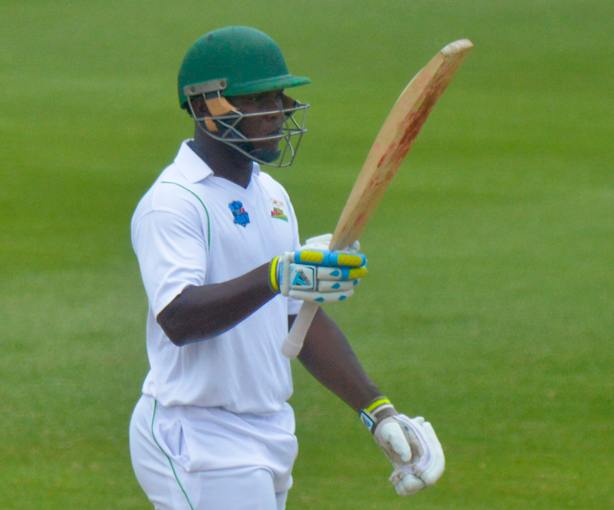 WICKETKEEPER/ batsman Anthony Bramble led the Guyana Jaguars spirited fightback with his maiden first class century and stole the limelight on day one of the seventh round Cricket West Indies (CWI) Professional Cricket League (PCL) Four-day encounter between the title-holders, and the Leeward Islands Hurricanes.

The 27-year-old Bramble held the innings together after the hosts were reduced to 41-4 at one stage of the Day/Night encounter at the National Stadium, Providence.
Watched by a handful of spectators, the right-hander’s effort with the bat has been instrumental in taking the Jaguars to 276-8 when bails were lifted.
However, it was Bramble and Shivnarine Chanderpaul’s partnership which ensured the hosts ended the day with a marginal points victory.
The pair had manufactured a salvage operation after they had been thrust together with the Jaguars in deep trouble just before the close of the first session. They added 118 for the fifth-wicket, with the ex-West Indies captain contributing 51.
Bramble, who brought up his century when he cut Mervin Matthews through backward point for his 14th boundary, is unbeaten on 116 from 197 balls, hitting 16 fours and three sixes.

Veerasammy Permaul is the other not out batsman on one.

The 21-year-old struggled once again to rotate the strike and his 35-ball resistance was ended when Jeremiah Louis nipped one away from the opener to have him caught behind for 10.After opting to bat, the Jaguars were left gasping for breath. Their openers’ Tagenarine Chanderpaul and Chanderpaul Hemraj were off to a sedate start, which resulted in a partnership of just 17 runs off 69 balls.
The tourists’ seamers were tight and disciplined, and the dismissal of Chanderpaul was a combination of out-swingers and patience.

The left-handed Leon Johnson was then trapped leg before wicket to off-spinner Rahkeem Cornwall without scoring, and from 21-2 it became 36-3 when Matthews then claimed the wicket of Vishaul Singh (5) with an extra bit of bounce from the track when the batsman edged him to Devon Thomas in the slips.
The session turned decisively in the visitors’ favour as Hemraj, who struck four delectable boundaries in his 25, edged Cornwall to slip where Thomas again obliged with a sharp catch.

But Chanderpaul and Bramble then cautiously guided their side through to the first break without further trouble.
However, after the break the pair had other ideas as they began the rebuilding process with a steady partnership without major alarm. They gathered the runs at a decent pace – rotating the strike well and putting away the bad balls – as they extended their stand as the session progressed.

Bramble was the faster of the two to reach fifty, registering his ninth at this level off just 70 balls, finding the fence on nine occasions, while Chanderpaul, who occasionally came out of his shell with crisp attacking strokes, had no problems in wearing down the tourists’ bowlers, as the pair continued untroubled until the interval.

Soon after the interval, Chanderpaul smashed Chesney Hughes for his second six to reach his fifty off 115 balls, but medium pacer Thomas, after getting some reverse swing, then took the key wicket, trapping the left-hander leg before, at 159-5.

Keemo Paul (5) went immediately after, caught off the bowling of left-arm spinner Hughes, but Bramble, who was joined by Sherfane Rutherford continued his resolute knock. The pair put together 64 before Rutherford was trapped leg before wicket to Cornwall for 23.
Romario Shepherd (22) joined Bramble, and he too provided valuable support until he was bowled by Gavin Tonge. Play resumes today at 14:00hrs.