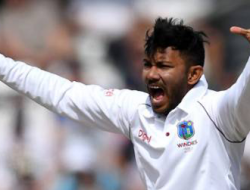 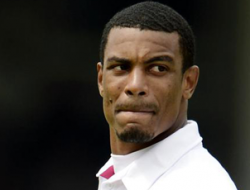 Print
Devendra Bishoo once again proved the main weapon as he spun the Windies to a comfortable 117-run victory over Zimbabwe in the first Test at Queens Sports Club. The legspinner followed up his 5 for 79 in the first innings with 4 for 105 on Tuesday (October 24), which included three crucial middle-order wickets that allowed the tourists to wrap the match up inside four days.
Although Zimbabwe were once again guilty of some soft dismissals, the indies could reflect on an impressive win. With the unusual challenge of expectation hanging over them, they bounced back from a tough opening day on which they were bowled out for 219 to dominate the game thereafter. Bishoo led the way, chipping away during his 32 overs in the second innings on a pitch that had lost its pace since the opening two days.
The fourth day began brightly for Zimbabwe, with Graeme Cremer bowling Kemar Roach with the very first ball to earn his eighth wicket in the match and give himself a shot at a hat-trick. While Shannon Gabriel kept the hat-trick ball out, Roston Chase was unable to take the century on offer as he was bowled for 95 as he attempted a big hoick off Sean Williams.
The Windies had added just four runs to their overnight total, and Zimbabwe ensured that the first session belonged squarely to them when Hamilton Masakadza and Solomon Mire saw off the new ball and took the hosts to lunch on 76 without loss. Both openers continued their bold strokeplay after the break, with Masakadza going to his fifty in 85 balls. It was his first Test half-century in almost three years, having gone 10 innings without one.
But the breakthrough came two overs later when Masakadza (57) was caught bat and pad by a turning delivery from Kraigg Brathwaite, ending a 99-run stand, and in the next over Roach found reverse-swing to bowl Mire (47) with an inswinger. That set up the contest of the day, with Roach bowling at pace to Taylor with a reversing ball and two, or sometimes three, men catching on the leg side.
Taylor saw out the three overs remaining in Roach’s spell, then navigated a similar threat from Jason Holder. But Zimbabwe lost Craig Ervine for 18 when he was trapped lbw by Bishoo, who struck again three overs later when he saw Sean Williams come down the track and held the ball back to have the left-hander stumped.
From 99 without loss, Zimbabwe had fallen to 155 for 4. But after Tea Taylor and Sikandar Raza went about reconstructing the chase in a sturdy stand of 64, during which Taylor saw off another testing spell from Roach to reach fifty. Raza looked assured and measured in his play as he moved to 30, but then fell to the bad delivery as he hit a long-hop from Bishoo straight to cover.
The innings disintegrated thereafter, with Malcolm Waller needlessly run-out by Taylor as the pair attempted a single that was never there, before Taylor ran himself out for 73 as he returned for a second. In between Regis Chakabva chipped a tame return catch to Chase.
There was still some time for fun though, as No. 11 Chris Mpofu swung his way to a career-best score of 33 in a partnership of 53 with Kyle Jarvis – a record stand for the last wicket at Queens. Mpofu’s efforts earned the loudest cheers of the day from the small crowd as he hit four fours and a six. But perhaps more importantly, he showed what could have been for Zimbabwe if their batsmen had not given so many of their wickets away so softly in the match.
Brief scores: Windies 219 (Shai Hope 90; Graeme Cremer 4-64) and 373 (Roston Chase 95; Cremer 4-114) beat Zimbabwe 159 (Devendra Bishoo 5-79) and 316 (Brendan Taylor 73; Bishoo 4-105) by 117 runs.