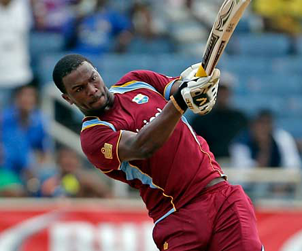 KINGSTOWN, St Vincent – Windward Islands Volcanoes reached 271 for seven off 98 overs one hour after lunch on the third day of their WICB Professional Cricket League fourth round first-class match at Arnos Vale today.

The not out batsmen were Johnson Charles on 148 from his overnight 79 and Alston Bobb, four. Charles’ century took 250 minutes off 191 balls and included ten fours and three sixes.

Today, Andre Fletcher, who resumed on 35, was caught and bowled by off-spinner Ashley Nurse for 61 (206-3). He batted for 203 minutes, faced 161 balls and hit eight fours and three sixes.

Sunil Ambris was caught at short-leg by Shai Hope off Nurse for nought (212-4).

Romel Currency was leg before wicket by Nurse for three (228-5).

Shane Shillingford was caught at short-leg by Hope off Nurse for five (244-6).

And captain Liam Sebastien was caught at backward square off left-arm spinner Jomel Warrican for six (265-7).

Yesterday, Tyrone Theophile was bowled by Warrican for 20 (46-1), and Keddy Lesporis was caught at cover by substitute Kenroy Williams off Warrican for eight (56-2).