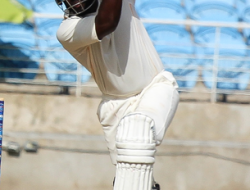 All-rounder Hayley Matthews says although West Indies Women’s performance in the ICC Women’s World Cup earlier this year was below par, the Caribbean side gained valuable knowledge from participating in the tournament.

West Indies entered the tournament as one of the favourites but lost their opening four matches to end with just two wins in seven matches, and finish sixth in the eight-team standings.

“Even though we did not do well, I think we learned a lot from playing at the World Cup,” Matthews told Barbados Today.

“The knowledge we gained from the World Cup will serve us in good stead. I did not have the best tournament but everyone goes through these phases when they are not performing well.”

The 19-year-old said she was pleased with the way the team rebounded after the disappointing World Cup campaign, to comprehensively defeat Sri Lanka in the One Day  and Twenty20 Internationals played in the Caribbean last month.

They swept the ODI series 3-0 at the Brian Lara Stadium in Trinidad before pulling off an identical clean sweep in the T20 series at the Coolidge Cricket Ground in Antigua.

“I think the team really picked back up in the series against Sri Lanka. We won the ODI series  three-nil and also won all three Twenty20 Internationals to defeat Sri Lanka six-nil, which was a good performance,” Matthews pointed out.

“Personally, I did pretty ok with the bat and ball. I was able to take a fair amount of wickets in the ODI and Twenty20 series and perform decently with the bat.”

She averaged 44 with the bat and claimed four wickets at an average of 21 with her off-spin in the ODI series, while scoring 71 runs and taking seven wickets in the T20s.

Matthews is currently the top Twenty20 bowler in the ICC rankings.

“I did not expect to be doing so well with the ball so early in my career. Being ranked at number in a particular aspect of a sport is something that everyone hopes to achieve,” she explained.

“I have been making strides with my bowling over the last two years. I am really happy that all of the training and hard work I have put into my bowling has finally began to pay off.”

Matthews said the increasing bowling workload against Sri Lanka had led to her success with the ball.

“In the series against Sri Lanka, we did not have as many bowlers and I was given the opportunity to showcase my skills and I was very happy about that.”

Since making her international debut in 2014, Matthews has scored 816 runs and taken 33 wickets in 33 ODIs. She has played 25 T20 Internationals, scoring 419 runs and grabbing 27 wickets.

She also has the distinction of never being dropped from the West Indies team.

Multi-talented, Matthews won silver in the javelin for Barbados at the 2013 and 2014 CARIFTA Games, and bronze at the Central America and Caribbean Juniors Championships in 2014.

She admitted athletics was far removed from her mind because her main focus was now on cricket.

Matthews will shortly pack her bags and head to Australia where she will represent the Hobart Hurricanes in the Women’s Big Bash League starting next month.