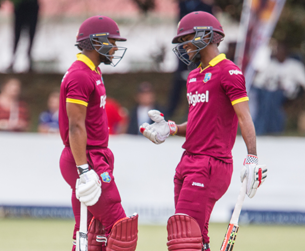 West Indies seemed en route to an uncomplicated victory in pursuit of 258 in their second game of the tournament, when they reached 220 for two in the 45th over.

However, they lost six wickets for 37 runs in the space of 32 balls—including three wickets in the last over with four runs required – as Zimbabwe forced their way back into the contest to earn a share of the points.

“We needed 60 runs with eight wickets in hand at one stage and nine times out of ten you’d expect the batting side to do that,” Radford said.

“I think a little bit of panic set in which is easy when you’re away from home and there’s a noisy crowd. To be fair, they (Zimbabwe) actually bowled well and took the pace off on what was a slow-ish wicket.”

He added: “There were big boundaries and we made a made a couple of good strikes to keep us in with a chance of winning and I think after we got into that position it was just a case of knocking the ball around but one or two [players] sort of panicked under the pressure and then we ended up with the tie rather than the win which we probably deserved.”

The run chase had been expertly guided by novice Shai Hope who carved out 101 off 120 balls in only his second One-Day International, and opener Kraigg Brathwaite who struck 78 from 117 deliveries.

Together, they put on 162 for the third wicket, a stand which put the Caribbean side in pole position to take victory.

“I thought it was outstanding. They were] both great innings in a wonderful partnership … to set up the potential win,” Radford noted.

“We’ve talked about seeing the 50 overs in blocks of ten and that there were certain rates we wanted to go at to keep up with Duckworth/Lewis. There were a bit of rain clouds around and we thought it could come down to Duckworth/Lewis and also we just wanted to break it up so players knew what kind of rate to bat at.

“I thought both were exceptional, they rotated the strike really well. There are two really talented young players who played as well as they could play.”

Despite the result, Radford said West Indies were doing all the right things and needed to remain consistent for the remainder of the tournament.

“I think we’re playing good cricket. There are a lot of positives to be taken from [the game] as disappointed as we were not to cross the line, having played so well,” the Englishman said.

“We know we are playing good cricket, we had a good win against Sri Lanka a couple of days ago… We have to keep doing these things, keep doing the basics well, keep pinning sides down in the field and making it tough for them to score. And in terms of batting [we have to] set up the innings. I thought what was very good with those young batters (Hope and Brathwaite) was that they paced it well, didn’t go too rash early on and got us into a situation where to be honest we should have won.”