WI into the quarters 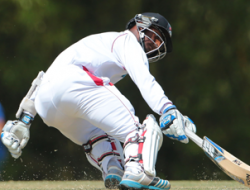 16th March 2015 Comments Off on Windies doing same things over and over Views: 1963 News

The West Indies did as was expected against the United Arab Emirates. Having worked out the permutations that were necessary to earn a place in the quarterfinals, they achieved a convincing result.

I am not going to dwell too much on the match, since that might be seen as given credibility to a country that, cricket wise, should not even be on the same field with the West Indies. The UAE were at the World Cup, and I am sure they have benefitted. Good luck to them and all the other minnows who aspire to associate with the elite of the game.

Chris Gayle’s absence yesterday may have been a blessing in disguise, as it provided an opportunity for Johnson Charles to play. More importantly, Charles would have gotten a feel of the conditions before going into battle against New Zealand.

Hopefully, he will partner Gayle, as we have all seen that Dwayne Smith simply cannot do what is necessary with bat or ball, to make the conversion from a T20 cricketer to this longer version.

Charles’ presence will be a major boost to Gayle, and provides a glimmer of hope against New Zealand. He must soak up as many of the early bowling as possible and allow Gayle to work things out from the non striker’s end. The longer Gayle stays at the crease, whether striking or not, the better the team will be served.

I remain convinced that we are doing the same things over and over and expecting different results. That may work against the weaker teams but we are at a point where luck will definitely run out against the likes of New Zealand, Australia and Sri Lanka.

I have to wonder if the team’s management is analysing our performances. If they are, there is no evidence to support it.

I have said often enough that the interest of the team must trump individual agendas. Somehow, I sense this is not the case.

Why is Marlon Samuels still batting at three, and struggling at that, while Lendl Simmons, a natural opening batsman, who is technically better equipped to handle the swinging, bouncing ball, is coming in at six?

Is it because Simmons scored a century at that position so he will remain there forever? And who made that decision?

As it stands, yesterday’s match against the UAE was an opportunity to make the adjustment but since it did not happen, it suggests that Samuels will stay at three no matter what. How unfortunate! I am on record as saying that I prefer to meet New Zealand in the quarter final, ahead of Australia or Sri Lanka. We got what I think was the best opposition of the top three from Group A for the West Indies. I maintain that the Kiwis, while they have done well in all their matches so far, are the most vulnerable of the top three. While we go into that match as underdogs, our best performance will get us past the Kiwis.

But it will NOT happen unless we have a plan, which must be highly thought out, and executed by a team effort and common understanding among each player.

As it stands, we have beaten The UAE, Zimbabwe and Pakistan, and lost to South Africa, Ireland and India – three wins, and three losses. Still, our journey continues. We have three more matches to win if we are to become World Cup champions 2015. Unfortunately, we do not have the luxury of losing another match.

Unless we understand the need for meticulous planning, total commitment and an all out team effort, minus individual agendas and egos, things could come to a screeching stop next Sunday in Wellington.