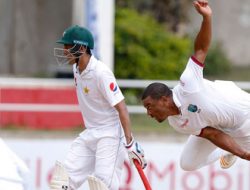 5th May 2017 Comments Off on Williamson eager to team up with Tridents Views: 1080 News

Williamson eager to team up with Tridents

NEW Zealand international captain and Tridents marquee player Kane Williamson is eager to take on the best bowlers in the Hero Caribbean Premier League (CPL), especially with Dwayne Smith as his partner.
Williamson, who is currently representing the Sunrisers Hyderabad in the Indian Premier League, will be at the other end when Smith unleashes his trademark power in the 2017 edition of the Hero CPL this summer.
Known more for his technical excellence than overwhelming power, 26-year-old Black Caps star Williamson and Smith should make the perfect pair when they pad up for the Tridents starting on the weekend of August 5-6 against the Jamaica Tallawahs in Central Broward Stadium, Lauderhill, Florida.
“Dwayne is a dynamic and powerful opening batter,” Williamson said. “Having the opportunity to open with him is something that I am looking forward to and I think our different styles should complement each other.”
Individually Williamson and Smith have produced impressive Twenty20 records to date. Smith has scored 6 776* T20 runs while Williamson adds 2 658* runs (*stats accurate up until May 2 2017), not for their national teams but while playing international club tournaments.
Together Smith and Williamson are set to lay a platform for a formidable Tridents batting line up which also features international stars Shoaib Malik and captain Kieron Pollard.
The prospect of playing on a high-powered Tridents side intrigues the New Zealand skipper.
“It’s very exciting to join a strong franchise like the Tridents”, Williamson added, “And I am looking forward to getting over and meeting the team. Hopefully I can do my bit in helping the Tridents have a successful year.”