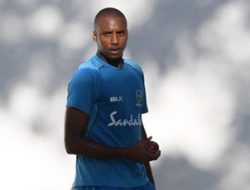 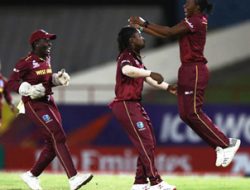 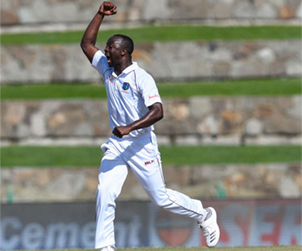 NORTH SOUND, Antigua – Strike bowlers Kemar Roach and Shannon Gabrielcontinued their impressive form in the longest format of the game, sharing five wickets to give West Indies an early edge over India in the first MyTeam11 Test – co-sponsored by Skoda and KEI – their opening match of the new ICC World Test Championship.

Roach ended with 3-34 from 17 overs and Gabriel finished with 2-49 from 15 overs, as India reached 203 for six in their first innings, after they were sent in to bat before rain brought an early close on the opening day at the Vivian Richards Cricket Ground.

Roach and Gabriel made vital breakthroughs during a day marred by the weather, though the home team’s attack met resistance along the way from Ajinkya Rahane, whose 81 was the top score, K.L. Rahul with 44, Hanuma Vihari with 32 and Rishabh Pant, not out on 20.

West Indies made a bright start to the contest following a 15-minute delay to the start, due to rain, when they exploited helpful conditions and reduced India to 25 for three inside the first hour.

West Indies however, failed to make deep inroads into the Indian batting, as Rahane together with Rahul in a 68-run, fourth-wicket stand and then with Vihari in an 82-run, fifth-wicket stand consolidated their side’s position either side of a short, sharp afternoon shower which prompted an early tea with the visitors on 134 for four.

After the start, Kemar Roach struck twice in his third over, when he had opener Mayank Agarwal caught behind for five, playing defensively forward to a well-pitched delivery that moved away, the same method of dismissal three balls later, when Cheteshwar Pujara fell for two.

Three overs later, Shannon Gabriel set India further back, when he had India captain and star batsman Virat Kohli caught at gully for nine, fending away a short, rising delivery.

For close to 2 ½ hours either side of lunch, they met defiance from Rahul and Rahane, as the Indian pair took their side to 68 for three at the interval, as they started to repair the early damage.

Roston Chase broke the Rahane-Rahul partnership with his second delivery about an hour after lunch, leaving India 93 for four, when he had the lanky Indian opener caught behind, down the leg side, by Shai Hope, keeping wicket in the absence of regular wicketkeeper Shane Dowrich, a late withdrawal, due to an ankle injury.

More resistance to West Indies came, when Hanuma arrived and played solidly for an hour and 20 minutes before he nibbled at a delivery outside the off-stump from Roach about half-hour after tea and was caught behind to give Hope his fourth catch of the innings.

Six overs later, Gabriel followed up with the scalp of Rahane, when the Indian vice-captain was bowled, playing on, a short, rising delivery following a 163-ball innings that included 10 boundaries in a near four-hour stay at the crease.

West Indies were denied a chance of further success, when another downpour of rain about eight minutes after the scheduled close brought play to a final halt for the day.