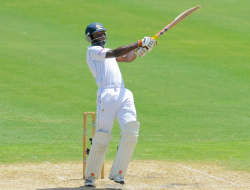 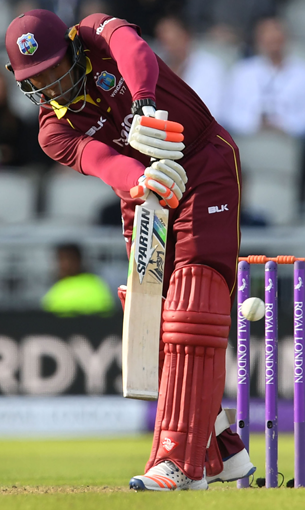 It has looked likely for quite some time, but defeat at Old Trafford confirmed that West Indies will have to progress through next year’s qualifying tournament to reach the 2019 World Cup. Barring some early striking from Chris Gayle it was an insipid performance as England secured their 13 victory in the last 14 completed ODIs between the teams.

Jonny Bairstow, who had retained his place at the top of the order having replaced Jason Roy in the Champions Trophy semi-final, took his opportunity in commanding style with a maiden ODI century from 97 balls, celebrated with a skip of delight when he completed a three with just a handful of runs needed for victory. He and Joe Root added 125 in 19 overs for the second wicket to ensure a canter for England in their first ODI since the semi-final defeat against Pakistan at Cardiff.

West Indies limped to 204 for 9 in their 42 overs – the match trimmed after a two-hour delay due to a damp outfield which threatened to become a significant issue as the sun shone in Manchester – and even those heights required Jason Holder’s unbeaten 41. Gayle, playing his first ODI since the 2015 World Cup, was dropped third ball by Root at second slip and plundered three sixes in the first four overs but that was deceptive: from 43 without loss after five overs, West Indies made 161 for 9 in the remaining 37.

Spin played an important part with Moeen Ali breaking the opening stand when brought on in the sixth over – albeit with a long hope – and Adil Rashid claiming 2 for 31 in nine overs. Ben Stokes was the leading wicket-taker with 3 for 43 and the disappointment that his figures were dented somewhat by a 15-run final over, which included two full-toss no-balls, will have been tempered by the fact that Marlon Samuels was among his successes. Stokes had not taken Samuels’ advice to go and “field on the boundary”, standing a slip to the spinners, but kept his thoughts to himself.

The main hope for West Indies was that, as in the T20 at Chester-le-Street, that spin and pace-off the ball could leave stroke-making tricky for England’s dashing batting line-up. That was not the case, though, and they could not push the required rate into anything bordering a challenging situation. Alex Hales was again quickly out of the blocks before driving Jerome Taylor to backward point, but Bairstow and Root didn’t need to do anything more than bat properly.

Bairstow has been desperate for a run in the one-day side and has been the posterboy for the depth England now have, because whenever called on he has usually delivered. The opportunity has come opening after Jason Roy’s lean year in one-day cricket and he doesn’t appear to have designs on wasting it. Roy will be pondered what it means and it probably leaves him needing injury or rotation to get his place back during the tours of Australia and New Zealand.

Root was just Root, moving along in un-fussy fashion to a 49-ball half-century, against a side whose interest in the contest quickly waned as the target was hauled in, until he chopped on against Keswick Williams who added a second wicket when Eoin Morgan edged behind. But it made no difference. The main interest was whether Stokes would leave Bairstow enough runs to play with for his hundred. There was no stealing his thunder.

For a handful of overs, it looked as though England may be tested and made to rue a dropped catch. Having waited for the action, the crowd were greeted with some heavy-hitting from Gayle after he thick-edged his third delivery from Chris Woakes only for it to burst through Root’s hands. The combination would have their redemption, when Root took a spectacular chance over his shoulder running backwards from cover.

After the early chance, Gayle had launched Woakes over long-on and taken two further sixes off David Willey in the space of three balls. With Evin Lewis at the other end, it felt much like the T20 on Saturday. However, Gayle’s mobility – never great at the best of times – appeared hindered with a leg problem (although he was able to field later on) and jogged singles became walks. The early momentum was being sucked out of the innings when Gayle tried to clear the off side and Root made amends. With the openers gone and Shai Hope struggling to get his innings going, England regained control.

It took Hope and Samuels, who did not find the boundary during his 46-ball stay, 14 overs to add their 50-run stand which was broken when Hope was well caught at deep square leg by Bairstow to give Stokes his first wicket.

The one Stokes really wanted, however, came in his next over when England successfully reviewed for a glove down the leg side by Samuels after the delivery had originally been called wide. There were no fireworks when the decision was confirmed although Stokes managed a smile in the huddle and appeared to enjoy watching Samuels walk off.

Jason Mohammed and Rovman Powell managed a six a piece – Powell’s a wonderful straight drive off Liam Plunkett – but the pair fell on consecutive overs when looking to kick on. Mohammed picked out deep midwicket off Rashid and Powell sent a leading edge to mid-on. Not for the first time, Holder was left to try and repair the damage and his fine-strike – 124.24 – was second only to Gayle, but it didn’t prove anywhere near enough.