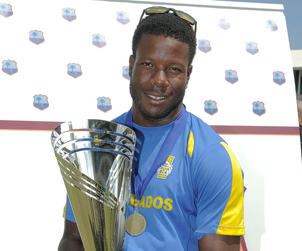 Barbados Pride coach Hendy Springer says the loss of key players to international duty will affect their overall play although he expects people to step up to fill the gaps.

Barbados, the defending champions, open their NAGICO Super 50 campaign against the Combined Campuses and Colleges (CCC) at the National Cricket Centre today from 9 a.m. And Springer says the unavailability of their top players will be a tough situation to deal with.

“Of course, it puts us under a lot of pressure. A lot of our top players who were key to our success last year are on international duty but we can use that as a positive thing. I think it presents an opportunity for the younger players to come in and make a name for themselves,” Springer told WICB Media.

“Obviously it will affect us because we got some dynamic players away like Dwayne Smith, Carlos Brathwaite, Jason Holder, those type of guys, of course we will miss them.”

Asked however if his side had been able to overcome their flaws in the one-day format, a format they have faltered in recent years,” Springer said: “I’d like to think so but…..over the years we have not done as well in the one-days as we have in the Regional Four-day competition. Obviously there is a reason for that. Sometimes it is a lack of awareness sometimes you lose wickets at the wrong time, all these type of things I think that we are slowly trying to work our way to the top of that particular concern and problem.”

Springer said preparation for the 2015 season had gone well with a number of trial games but now the preparation had been refined for the competition squad.

Springer expected Kirk Edwards, captain Kevin Stoute, and Tino Best especially to have something to prove in this year’s tournament.

But he believes the unit would be as strong as the sum of its players.

“I’d like a good team effort because the guys have got different responsibilities within the team set-up so…so everybody can get an opportunity to do their business.”

The CCC on the other hand, who have enjoyed some close matches against the Barbados outfit in the past, will be out to prove that they still are worth a place in regional competitions after being confined to just the 50-over format.

Ahead of the tournament, CCC coach Floyd Reifer said: “We have a good crop of young fast bowlers and batsmen, so we will be looking forward to the Nagico Super50 and allowing these young players to showcase their talents.”