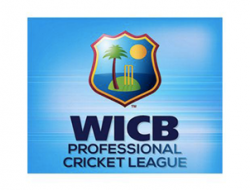 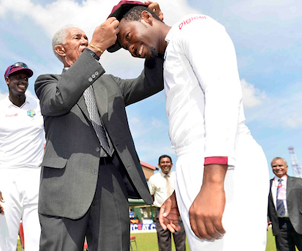 The 23-year-old Warrican was West Indies’ best bowler, finishing with four for 67 as Sri Lanka, opting to bat first, were dismissed for 200 at the P Sara Oval.

Sir Garry, who arrived here earlier this week to witness the game, presented Warrican with his maroon cap and the player said the icon’s few words had inspired confidence.

“One thing that stuck with me that he said was that I had many games to come and he expects great things from me,” Warrican told journalists afterward.

“So it felt special from a great man that those words came out of this mouth. It really warmed my heart; that’s the truth.”

Sir Garry, the greatest all-rounder the game has seen, is also Barbados’ only living National Hero.

And Warrican, also Barbadian, said he had benefitted greatly from Sir Garry attending training sessions with the Barbados team and giving regular advice.

“Sir Garry has been coming (around since in) Barbados so he has been talking to the Barbados team throughout the first class season, so I’m accustomed to him talking to the guys and talking to me personally,” he explained.

“He has even come to the nets sessions and had one-on-ones with me. He also gave me a lot of advice and helped me on some different skills while playing for Barbados.

Warrican was the only change to the West Indies team from the Galle first Test, replacing fast bowler Shannon Gabriel.

And he said while he did have some jitters, he was still pleased with the way he bowled throughout.

“I thought my performance was average; it could have been better, more consistent but a four-for is still a very good start for me,” he said.

“In the beginning, the jitters were there but as I got into the work, I felt a lot better and the pressure was gone. When the captain told me it was my turn to bowl, I was excited and at the same time nervous.”

He added: “It was very close (to my ideal start on debut). You couldn’t ask for a better start than that. Obviously, I would have loved to have gotten a five-for at the beginning of my career, but a four-for? I’d take it any day.”

West Indies resume the second day on Friday on 17 for one.