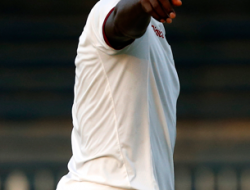 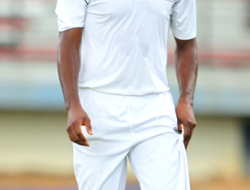 At close of play on the keenly contested opening day, the Jaguars cruised to 69 without loss in reply to the Scorpions’ first-innings total of 255 all out.

The 31-year-old wicketkeeper/batsman Walton, who opened the batting, was composed and methodical in compiling 101.

Bowling an accurate line and length, Joseph, 25, grabbed 7-53 on a wicket that, though offering good bounce and a little sideways movement for the seamers, was easy-paced.

Left-handed openers Shimron Hetmyer, who is not out on 51, and Tagenarine Chanderpaul, on 14, carried the visitors to the close without much fuss.

Earlier, the Jaguars won the toss and opted to bowl first under sunny skies, on a pitch with a light coating of live grass.

Guyana, known for relying heavily on their spinners over the years, made significant inroads through the Joseph-led pace attack, particularly in the afternoon.

The Scorpions lost their last six wickets for 43 runs.

Joseph got things rolling for the Jaguars when he slanted a fullish delivery across left-hander John Campbell (nine). The opening batsman took the bait, attempting a big drive only to edge a catch to Leon Johnson at second slip at 15-1.

Walton and West Indies Test batsman Jermaine Blackwood then added 60 runs for the second wicket before the latter was sent back to the pavilion for 29.

Blackwood, who played some loose shots during his knock, was surprised by a quick, short-pitched delivery from rookie pacer Romario Shepherd and could only sky his attempted pull shot to Veerasammy Permaul at mid-on. It was Shepherd’s maiden first class wicket.

Andre McCarthy made 19 before he nicked one behind to Bramble who, though seemingly wrong-footed, held onto a low catch at 103-3.

Walton then found a partner in Brandon King and the pair added 78 runs for the fourth wicket.

But just before tea King threw his hand away, aiming a wild slash at Joseph only to spoon a catch on the offside to Shepherd.

At the other end Walton, who has been in good form of late, remained solid. He survived a couple of leg before wicket shouts, but also played a few pleasant drives and timely sweep shots along the way. However, several commanding square cuts to the boundary ropes highlighted his innings.

A six off left-arm finger spinner Gudakesh Motie over the leg side brought him to 99 before he nudged behind square for two in the same over to reach the landmark.

Motie dismissed Walton in the very next over he bowled to him. Walton edged the spinner to slip for Johnson to take the catch low down at slip and, though the Jaguars team celebrated, the batsman stood his ground until umpires Verdayne Smith and Joel Wilson deliberated and eventually gave him out. Walton hit 11 fours and three sixes off 173 deliveries. It was his fourth first class century overall.

The spirited Shepherd, who got one to shape away from medium pacer Derval Green (seven) in the afternoon, found the edge for wicketkeeper Anthony Bramble to finish the job.

Jacobs (15) flashed at a short of a length delivery from the persistent Joseph and offered a catch to second slip fielder Johnson, who secured the ball on the second attempt.

Hetmyer, the former West Indies Under-19 captain, then lit up the afternoon with enterprising stroke play as the Jaguars bit into the deficit. His knock has so far spanned only 54 deliveries.

B King c Shepherd b Joseph 30

J Taylor not out 1

T Chanderpaul not out 14

S Hetmyer not out 51

Position: Jaguars trail by 186 runs with all 10