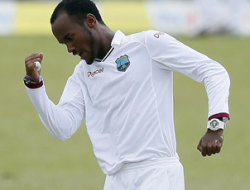 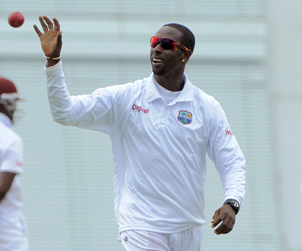 WINDWARD Islands Volcanoes had an eruption of success in the afternoon sessions against Guyana Jaguars as the home team stumbled to 95 all out at stumps on the penultimate day of their West Indies Cricket Board (WICB) Professional Cricket League (PCL) Regional 4-day match at the Guyana National Stadium.Guyana now have a lead of 229 runs after they restricted the Volcanoes to 228 – 9 just after the lunch interval.

Volcanoes resumed from their overnight score of 127 – 2 but only scored 101 runs before the other eight wickets fell. Steven Jacobs led the Guyanese attack with 4-56 while being assisted by the debutant Gudakesh Motie (2-66), Ronsford Beaton (2-56) and Chris Barnwell (1-32) as they restricted the Volcanoes in 89.4 overs.

Devon Smith pushed on from 45 but fell on 52, his 47th first-class fifty while only Tyrone Theophile (46), Keddy Lesporis (38) and Dalton Polius (31) were effective with the bat. Volcanoes’ captain Liam Sebastian was retired on 14 by a lifting delivery from Beaton which hit him on the helmet and halted play.

With a lead of 134, Guyana began their second innings well in command but three quick wickets put the visitors right back in the match.

Kyle Mayers removed Assad Fudadin for a duck then Dalton Polius held onto a good catch at mid-on as Mervin Matthew again got rid of first innings centurion Rajendra Chandrika for five. Things continued to go haywire for the Jags when e captain Leon Johnson nicked one from Mayers into the gloves of wicketkeeper Sunil Ambris for two, Guyana were then 7 for 3 in the eighth over.

Left-handers Shivnarine Chanderpaul and Vishaul Singh once again tried to keep the boat steady and took Guyana to tea at 31 – 3. After the break, Shillingford got into the act again removing Chanderpaul for 34 and Raymond Reifer without scoring, in the space of three deliveries.

Barnwell (02) added to Guyana’s misery when he drove a Kenroy Peters-delivery to Matthew who took a low catch at mid-off, with over an hour left in the day.

Peters claimed his second victim when Anthony Bramble (01) edged one to Ambris. Four runs later Singh was caught behind off Shillingford for 24 then his next victim was Beaton who decided to go aerial after facing 16 balls and not scoring.

A bit of tough luck for Jacobs (16) who was given out lbw by a poor decision from umpire Shiv Sankar, on the first ball of the day’s final over.

The final day bowls off at 9:30 hrs as the defending champions try to keep the Windward Islands away from the 230-run target.