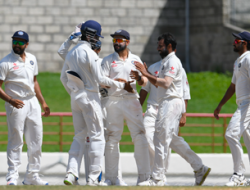 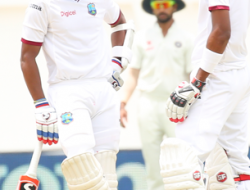 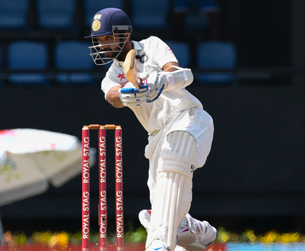 17th August 2016 Comments Off on Versatile Rahane quietly shows his worth Views: 1396 News

Ajinkya Rahane has shown himself to be a batsman adept at dealing with a variety of situations and tailoring his game to the team’s cause.

In the 137 minutes Ajinkya Rahane spent at the crease in India’s second innings in St Lucia, the most memorable moment possibly came when he was at the non-striker’s end. Ravindra Jadeja was on strike, and he dabbed Jason Holder towards gully. The ball went straight to the fielder, a fielder in a nominally catching position, and Rahane, already halfway down the pitch, screamed at Jadeja to start running. By the time the fielder worked out what was happening, Rahane had reached the danger end and Jadeja was safely on his way in the other direction.

It was a moment straight out of street cricket, all hustle and opportunism. On the fifth morning in St Lucia, India had to play street cricket in their charge towards a declaration, with West Indies spreading their field and a slow outfield keeping boundaries down but presenting opportunities for the stolen second or third run. With Rahane in the middle, India ran 11 twos and two threes in nine helter-skelter overs, adding 60 to their overnight total.

When India declared, Rahane was batting on 78. He had scored his runs at a strike rate of 67.24 despite hitting only two fours and no sixes. Not for the first time in his career, he had simply reached for his gearshift and found the appropriate gear.

In the first innings of the same Test, he had scored 35 off 133 balls, defending resolutely through a difficult session-and-a-half when India lost a heap of top-order wickets. He had seemed set for a big score when he was out to a rare error of judgment, seeking to sweep an offspinner bowling stump-to-stump.

As every batsman tries to do, Rahane was simply playing the way the respective situations demanded. But with most batsmen, it’s easy to tell when they are playing out of character. It’s not so straightforward with Rahane. He looked as much at home blunting West Indies’ bowlers in the first innings as he did milking them in the second. It was hard to say which innings was closer to his “natural game”. It has been hard to pinpoint his natural game right through his career.

It’s hardly a rigorous use of statistics, but the strike rates at which Rahane has scored his seven Test hundreds point to his versatility: he has made two hundreds at strike rates in the 40s, two in the 50s, and one each in the 60s, 70s and 80s. Add his 103-ball 98 in Fatullah, and he has a near-hundred with a strike rate of 95 as well.

Such versatility brings to mind Michael Hussey, who played a similar role for Australia in Test cricket. This is partly because, playing in an Indian team that has won most of its recent Tests, Rahane has had the opportunity to play both kinds of Hussey-style innings. He has had opportunities to drag his team out of tricky spots – as he did against South Africa in the first innings in Delhi, turning 139 for 6 into a total of 334 – as well as to set up declarations. The last six times India have declared in Test cricket, Rahane has been at the crease three times, and on one other occasion was dismissed 2.1 overs before Virat Kohli called his batsmen in.

Quietly, through this period, Rahane has become the highest-averaging batsman in India’s Test squad. After the first three Tests of the series against South Africa, his average had slipped below 40. Then came the twin hundreds in Delhi, and now, a series of understated accomplishment in the West Indies. By the end of the St Lucia Test, he was on the cusp of two milestones in his Test career: he had scored 1862 runs, and his average stood at exactly 49.00.

By a quirk of mathematics, 50 and 2000 could happen at the same time. It could happen in the fourth Test in Port-of-Spain, if he scores the remaining 138 runs there. If he is only out once, he will only need 88 to lift his average to 50, and if he isn’t dismissed at all, 38 will do.

Rahane doesn’t need his average to affirm the quality he has proved across all conditions, and seeing it tick past 50 probably isn’t his most urgent priority at this stage of his career. But if and when it happens, Indian cricket fans will cherish the moment.

For most of the 2000s, India’s Test line-up contained three batsmen with 50-plus averages. By the time his career ended, Virender Sehwag’s had slipped to 49.43. And so, the 50-plus average club, with the qualification of 2000 runs, contains only three Indian batsmen. You know their names, and in case you don’t, their initials will do: SMG, SRT, RSD. If and when he gets there, AMR will be in special company.