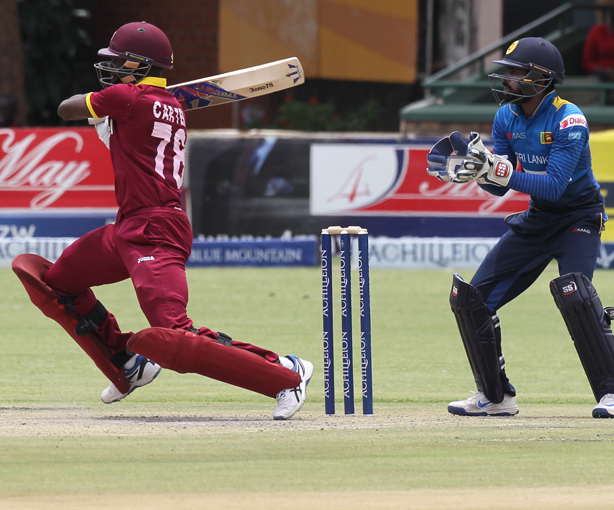 If off-field distractions have followed West Indies to Zimbabwe, their performance in their first game of the tri-series did not show it. They brought a largely young, inexperienced squad here but their win on Wednesday suggested depth and quality nonetheless, and they will arrive in Bulawayo a confident group.

West Indies’ three debutants in the first match helped to shape their win, with Shai Hope and Rovman Powell both making 40s before offspinner Ashley Nurse chipped in with three wickets. Nurse has insisted that rankings are not foremost in West Indies’ game plans, but their current position of ninth in the ICC rankings suggests a serious malaise that needs tackling.

With a forward-looking squad and the necessity for general improvement in one-day cricket, it’s hard to dismiss the feeling that West Indies are focussed on their future. They have already missed out on qualification for the Champions Trophy next year, and if they are to avoid the ignominy of having to play in a qualifying tournament for the 2019 World Cup, they will have to continue to build on performances such as those in their tour opener. This game offers their next opportunity to do just that.

The increased pace and menace with which West Indies’ quicks will operate brings with it myriad dangers for Zimbabwe’s batsmen. Shannon Gabriel and Jason Holder will not only gain extra lift from a traditionally dull surface, but Bulawayo’s drier pitches and outfields will also likely bring reverse-swing into the equation, as they did last year when Afghanistan’s Dawlat Zadran picked up nine wickets at 16.66 in five ODIs at Queens.

Dawlat’s pace and swing meant he was able to strike upfront with the new ball, and then again with the old to help Afghanistan win the series 3-2. The bowling stats from that series offer further clues as to which bowlers might prosper in Bulawayo: Wellington Masakadza, Tendai Chisoro and Amir Hamza – all spinners – were the other leading wicket-takers. Genuine pace, accompanied by spin, will form a potent attack.

With both Sri Lanka and West Indies gaining bonus points from their opening wins, Zimbabwe have their work cut out if they are to stop this tri-series becoming a two-horse race.

Zimbabwe coach Heath Streak called for more energy and aggression from his team after their defeat to Sri Lanka, and one player who normally has both in spades is Sean Williams. This is a player who spanked Zimbabwe’s fastest Test hundred while seriously ill with the flu earlier this year: he has clearly got the sort of fight Streak is looking for. Williams made starts in both Tests against Sri Lanka, so he’s in some nick, and he averages 40 at Queens Sports Club – his home ground. Williams also seems to enjoy batting against West Indies – in two World Cup matches against them he averages 146, with a pair of 70s in 2007 and 2015.

Given the advantages of his height and long fingers, Sulieman Benn‘s one-day bowling average of 46.38 is surprisingly high. Benn was part of the squad that lost to Pakistan last month, taking 2 for 158 in the series, and West Indies will want him to improve on those returns in Zimbabwe. Benn, 35, is of an age where consistency in performance is vital to continued selection. He should find Bulawayo’s pitches to his liking, and if he hits rhythm he will help West Indies retain control of the middle overs.

Zimbabwe will probably look to bring in an extra spinner in these conditions. A debut for Tarisai Musakanda would offer an injection of youthful hunger into the batting, though that would also necessitate a re-shuffle in the batting order.

With two spinners already in their line-up on Wednesday, and momentum with them following their win, West Indies may well go into this match unchanged.

Situated in the drier south of the country, Bulawayo tends to produce flatter pitches with less grass than Harare. Spin will be an important factor in the game, while inclement weather is less likely to feature – though when thunderstorms do brew they can be cataclysmic. Fortunately, Saturday should be sunny and dry.

“I had a chat with Marlon Samuels [who has been to Zimbabwe before], but apart from that we’re just pulling out all the data we can possibly find from the analysts in terms of the ground stats and the opposition. But cricket is cricket at the end of the day, you just have to play as you see it, and assess the conditions as quickly as possible.”
West Indies captain Jason Holder leads a squad with very little experience of Zimbabwean conditions

“We know their batsmen are pretty fearless. We know they like to hit boundaries. We’ll try and stop that, and starve them of the boundary option to put them under pressure.”
Zimbabwe captain Graeme Cremer thinks his team’s best chance of putting West Indies under pressure will come from disciplined bowling