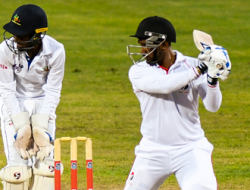 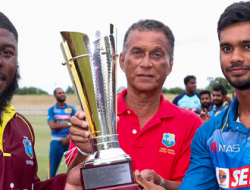 BRIDGETOWN, Barbados, CMC – Gavin Tonge proved there was life left in the old man yet with an incisive spell of fast-medium, swing bowling that catapulted Leeward Islands Hurricanes to a stunning, innings-and-four-run victory over Barbados Pride in the Digicel 4-Day Championship on Thursday.

Tonge collected 6-21 from 12 overs, finishing with match figures of 9-26, as the Pride were bowled out for 116 in their second innings about 50 minutes before the scheduled close on the second day of their second-round match at Kensington Oval.

batsman that reached 20. Jeremiah Louis, the Player-of-the-Match for a memorable all-round performance, formalised the result for the Hurricanes, when he had Nurse caught at long-off to end with 3-43 from 10.3 overs – and match figures of 9-112 to follow up a crucial first-innings half-century earlier in the day.

The result meant that the Hurricanes gained 19.8 points and the home team earned a meagre 3.6.

It was the Hurricanes’ first victory over the Pride at the West Indies first-class level in eight years, when they won by an innings and five runs at the North Stars Cricket Ground in Barbados’ most northerly parish of St. Lucy.

Also, it was the Hurricanes’ eighth victory ever over the same opponents, whom they have only ever beaten once in the Leewards.

Tonge’s performance followed a rearguard led by Louis that gave the Hurricanes a 120-run, first-innings lead, when they were bowled out for 233 around 20 minutes past the scheduled lunch interval.

Louis, the Hurricanes first-day bowling hero, gathered 62 from 109 balls in close to two hours to lead the way with the bat for the visitors.

He added 50 for the last wicket with Jason Campbell to frustrate the Pride, after the Hurricanes slumped to 183 for nine and looked in danger of being dismissed for less than 200.

Part-time off-spinner Kenroy Williams collected a career-best 5-50 from 20 overs to be the pick of the Pride’s bowlers. Shakeem Clarke supported with 2-15 from 8.1 overs.

Forced to use a makeshift opener, due to Shayne Moseley being struck on the helmet when fielding, Pride captain Kevin Stoute chose to partner Anthony Alleyne.

The experiment lasted just 22 balls before Tonge had Stoute caught behind for four in the fourth over of the innings.

Tonge has been playing at the West Indies first-class level for close to two decades and on a helpful pitch, the brittle Pride batting was no match, as his next three wickets all came through catches to either his captain Devon Thomas, the Hurricanes wicketkeeper, or second slip fielder Nkrumah Bonner.

Pride crashed to 18 for five, but Nurse and Moseley stemmed the fall of wickets for just over an hour, putting on 61 for the sixth wicket.

Moseley was however, needlessly run out for 15 before Louis and Tonge carved up the rest of the batting with mean, purposeful bowling.

Starting the day on 116 for four, the Hurricanes suffered a setback to their plans, when Bonner gave a return catch to Williams after adding eight to his overnight 20.

After his dismissal, the floodgates were flung open and Williams, in the main, worked his way through the Hurricanes batting.
Campbell came to the crease and frustrated the Pride with Louis for close to an hour, forcing the home team to take the second new ball which Stoute, bowling medium-fast, strangely shared with Nurse, bowling off-spin.

After this experiment failed miserably, Shakeem Clarke was handed the new ball and had Campbell caught in the slips for 18, fending a short ball to bring the innings to a close.

Hurricanes host Guyana Jaguars at Warner Park in St. Kitts in the next round of matches, which features Jamaica Scorpions against the Pride at Sabina Park in Jamaica.

N Bonner c and b Williams 28

A Jones c Bonner b Tonge 13

A Nurse c Taylor b Louis 67

S Clarke not out 8

Result: Hurricanes won by an innings and four runs