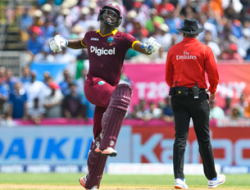 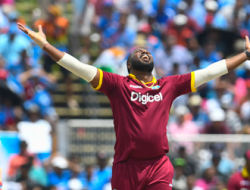 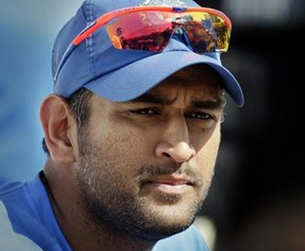 India captain MS Dhoni said he had guessed correctly that the final delivery from Dwayne Bravo would be a slower ball but his execution of the shot let him down. With two runs needed off one ball, Dhoni was caught at short third man and West Indies won the first T20 international by the narrowest of margins.

Dhoni said his team should be commended for their valiant chase in the highest-scoring T20 game ever. “I feel there were plenty of positives in this game because the way we chased down 245 runs, apart from the last ball,” he said after the match. “I felt we were totally in the game. Even the last ball, the thinking was right, the execution was wrong.”

A cat-and-mouse game that had been developing over the course of the final six balls reached a new level as Bravo engaged in several discussions, stalling for several minutes ahead of the last ball, with two required by Dhoni to secure what would have been a record chase. Even though Dhoni said he knew what was going to be sent down, he praised Bravo’s skills in such a pressure moment.

“When it comes to Bravo, I feel in the current scenario he’s among the best when it comes to the death bowling,” Dhoni said. “The amount of experience that he has really counts so you always know if he’s bowling it’s tough. What then becomes important is how we’re executing.

“You have to really guess what he’s looking to bowl and according to that you play your shots. So if you guess the bowler well and execute well, you’ll end up winning. Rather than thinking who is bowling, what’s important is to think what his strength is and where he’ll look to pitch the next delivery.”

Despite India conceding the third highest total in a T20I, Dhoni praised his bowlers for their effort to reel West Indies back in after Johnson Charles and Evin Lewis added 126 for the first wicket in 9.3 overs. By the end of the 11th over – a 32-run sequence in which Lewis struck the first five legal deliveries from Stuart Binny for six before mis-hitting a full toss – West Indies were 164 for 1.

Dhoni said he thought West Indies were on track for 270 or more before R Ashwin started to shift momentum with a four-run 12th over, bowling with the breeze at his back.

The wind from the pavilion end helped the spinners throughout the rest of the innings, and Ashwin and Ravindra Jadeja conceded just 18 runs in the 12th, 14th and 16th overs. India’s pace bowlers also began nailing their yorkers and the result was just 40 runs off the final four overs to keep West Indies to 245.

“I felt the way the boys performed overall was very good,” Dhoni said. “I was very happy how we brought the opposition down when it came to the last eight overs. That really matters because that is something where we have struggled quite consistently but it was a good exposure to our bowlers and they finished up well to restrict them to 245.”

Dhoni also praised the batting efforts of KL Rahul, who struck his maiden T20I century in just his fourth match. Rahul ended 110 not out off 51 balls, having missed the fastest T20I ton by two deliveries, taking 46 balls to reach three figures.

“He has been very consistent,” Dhoni said. “I feel that is a strength of Rahul also, compact player but at the same time unorthodox shots. He plays all over the ground, over covers, mid off, mid on. So a complete cricketer. Of course there’s a long way to go for him but the way he has played in the last six months, it’s very encouraging to see him bat.”

As for the experience of playing in Florida in front of a heavily partisan Indian diaspora, Dhoni joked that “even if we’re playing in Bermuda Triangle, they’ll be there”. He also praised the efforts put in by the groundstaff at the Central Broward Regional Park in Lauderhill.

“The facility is as good as anywhere else,” Dhoni said. “The ground itself is up to international standard. You can’t score 500 runs on a bad wicket, so fantastic wicket. The practice wickets were fantastic. When it comes to the stadium, it’s not a big stadium. The moment I say stadium I mean the number of fans it can house. I think it’s close to 15,000. So overall looking at everything as a complete package, I think it was fantastic. We had fun.

“When it comes to the Indian fans, it’s a pleasure playing in front of them. They follow us everywhere wherever we are playing. So it’s a first time we are playing in the USA but not to forget we have a big Indian community out here so thanks to them for coming and watching the game.”