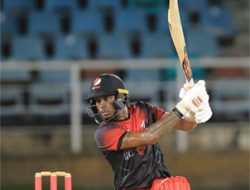 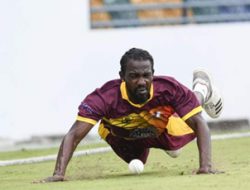 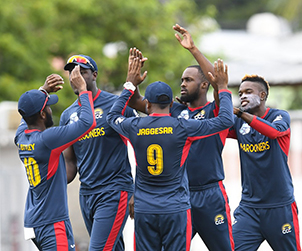 The Marooners earned bragging rights over fierce territorial rivals Barbados Pride with a tension-filled, four-wicket win in a low-scoring, day/night, Group A game at Warner Park to rebound from a depressing opening day loss against hosts Leeward Islands Hurricanes.

Chasing 173 for victory, the Marooners innings was in limbo at 82 for five in the 26th over, when Jordan strode to the crease.

He stoutly resisted the Pride attack and made a valuable 29 in a sixth wicket stand of 58 that tilted the balance of power firmly in the Marooners favour and made him a shoo-in for the Player-of-the-Match award.

When he was caught at square cover off left-arm spinner Joshua Bishop in the 37th over, the Marooners needed just 33 from the last 82 balls of the game.

But it was Guyanese Akshaya Persaud, who defied the Pride attack for the top score of 51 not out from 79 balls and an eight-minute stoppage for a lighting failure, that ushered the Marooners over the finish line with 18 balls remaining for their fourth successive Super50 Cup win over their opponents.

Persaud reached his 50 from 77 balls, when he swung a delivery from left-arm spinner Joshua Bishop over mid-wicket from the first ball of the eventual final over of the game and got six when fielder Nicholas Kirton failed to negotiate the boundary rope.

The result was formalised from the final ball of the over, when opener Abhijai Mansingh, not out on 14, returned from an injury earlier in the innings and turned Bishop into mid-wicket for a single.

Earlier, Jordan starred with the ball, grabbing 4-21 from 8.4 overs, to lead a disciplined Marooners attack.

Pride were guilty of the “cardinal sin” of failing to bat their full 50 overs and were bowled out for 172.

Their captain Jonathan Carter and left-hander Nicholas Kirton shared the accolade for the top score of 42, and left-handed all-rounder Kyle Mayers made 27.

No other Pride batsman reached 20, failing to come to grips with the steady, if not menacing Marooners pace attack, which was well supported by the spin trio of Kavesh Kantasingh, Larry Joseph and Persaud.

The three spinners exploited a pitch offering generous turn and appreciable bounce to share six wickets between them.

Jordan cleaned up openers Leniko Boucher and Kjorn Ottley cheaply inside his first spell, setting the Pride back on 18 for two in the sixth over.

Carter came to the crease and eased the nerves for Pride with a stand of 67 for the third wicket with UWI clubmate Kirton.

But the wickets of Kirton and wicketkeeper/batsman Tevyn Walcott for a three-ball duck – both to Joseph – in the 21st over rocked Pride again on 86 for four.

A couple of small stands between involving Carter, Mayers and Shamar Springer either side of a 29-minute stoppage for rain kept Pride rolling before they lost their last four wickets for 25 in the space of 58 balls.

Group “A” matches continue on Sunday with a day game between Hurricanes and Jamaica Scorpions at the Conaree Cricket Centre, which will be webcast “live” on the CWI website, www.windiescricket.com and the Windies Cricket You Tube channel.