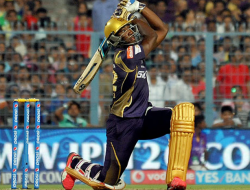 A boundary from Kyshona Knight off the final ball of a Super Over sealed a thrilling win for West Indies Women against Pakistan Women in Grenada. Chasing a revised target of 78 from 17 overs, Pakistan were on course for victory at 57 for 3, but a dramatic collapse which included three wickets in the final over, meant that the visitors could only tie the score, allowing West Indies to win the resulting Super Over and seal the series 3-0.

West Indies, after being inserted, began poorly, as the team folded for 88 in 19.5 overs. Kyshona’s twin sister Kycia top-scored with 49, but no other batsman was able to manage more than 8, as offspinner Sana Mir collected 4-14 to run through the line-up. Pakistan did not start their innings any better, losing three wickets inside six overs, but Bismah Maroof (30) and Mir (22) chipped in with handy knocks to leave Pakistan within sight of a consolation win. The team needed eight runs off the final over, and looked set to get them when Nida Dar hit the second ball of the over, bowled by Deandra Dottin, for four. However, three wickets off the last three balls, including two consecutive run-outs, helped West Indies force the tie.

Pakistan could manage just 3 for 2 in their Super Over, but West Indies found it difficult to overhaul even that score, managing just 2 for 1 from their first five deliveries. However, with two needed for victory off the last ball, Kyshona swung the final ball of the match, from Mir, to the deep mid-wicket boundary to spark wild celebrations among her team-mates.