Windies focused ahead of 1st Test 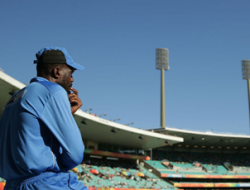 Test cricket returns to Windsor Park Dominica for the fourth time and West Indies will be looking to humble the mighty Australians at a venue where spin is king. Three Test matches have been played at this venue thus far with the West Indies winning one, losing one and the other ending in a stalemate.

What is unique about this venue is the fact that the twirlers have been the ones to bring the crowds to their feet. A total off 101 wickets have fallen at Windsor Park and of this the spinners have celebrated on 58 occasions. This has led both Australia and West Indies to include two spinners each on their squads for this game. West Indies have the Guyanese duo of Devendra Bishoo and Veerasammy Permaul, while the visitors have brought Nathan Lyon and the uncapped Fawad Alam to do their thing.

The last and only time these two countries met at this venue was three years ago, when Michael Clarke’s men took a 75-run win over the homesters, despite a 10-wicket haul from local hero Shane Shillingford.

Batting first, Australia made 328 all out with a century from wicketkeeper Mathew Wade and a half century from opener David Warner. Shillingford was the best of the West Indies bowlers with 6/119. West Indies replied with 218 all out with Shivnarine Chanderpaul scoring 68 and Keiran Powell 40. Lyon was the chief destroyer with 4/69.

With a lead of 110 runs, the Aussies to 259 all out in their second essay. Ricky Ponting scored 57 and Ed Cowan gritted out 55, as Shillingford would snare 4/100, to finish the match with 10/219. Set a victory target off 360, the West Indies put up a brave fight only to fall for 294. Chanderpaul again was the main run getter with 69, while Darren Sammy made 61 and Darren Bravo 45. Lyon claimed three wickets but the surprise destroyer was Clarke, who took 5/86.

The first Test at this venue was played back in 2011, when the West Indies came up against India. Batting first the West Indies put up 204, with Carlton Baugh scoring 60 and Darren Bravo 50. The pacey Ishant Sharma enjoyed the conditions and bagged 5/77.

India went to work getting past the paltry score and four half centuries took them to 347. Skipper MS Dhoni made 74, opener Abhinav Mukund 62, VVS Laxman 56 and Suresh Raina 50. With their backs against the wall, the West Indies lost both openers cheaply before centuries from Kirk Edwards and Shivnarine Chanderpaul propped them up, taking the score to 322 and setting India a victory target off 180.

They reached 94 for three when the game was called off as a draw. The last Test to be played at the venue in 2013, led to the West Indies first victory there. Zimbabwe came calling and Shillingford gave the home fans something to celebrate, as he captured 5/59 to bowl out the Africans for 175. West Indies on the back of centuries from Chris Gayle 101, Shivnarine Chanderpaul 108 and 86 from Denesh Ramdin, batted Zimbabwe out the contest with a reply of 381 for eight declared.

That man Shillingford was up to his old tricks again, taking 5/34, as Zimbabwe could muster only 131 in their second innings.