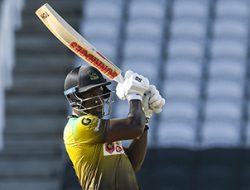 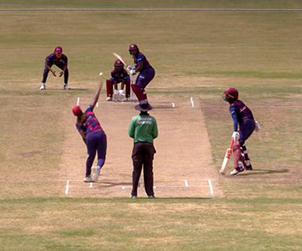 ST. JOHN’S, Antigua – Young Steffi Soogrim out of Trinidad and Tobago continued to impress the coaches and lead selector during the second West Indies Women’s high-performance camp in Antigua, guiding the Anisa Mohammed XI to a 6-wicket victory over the Hayley Matthews led XI. 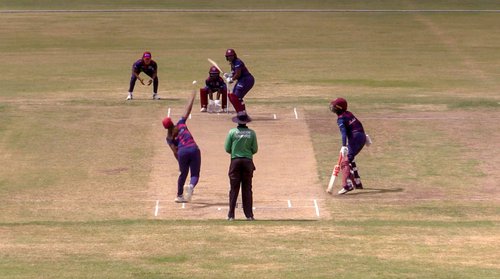 (Matthews in delivery in the Practice Match #2)

Matthews won the toss for a second time in as many matches and once again elected to bat first. Posting a defendable total of 170/3 from their allotted 40 overs. Matthews and fellow opener Rashada Williams posted a 36-run opening partnership before Matthews caught off Qiana Joseph for 12.

Kycia Knight, returning to cricket after more than a year off due to injury, looked like her picked up right she left off in 2019. She top-scored with 42 from 67 deliveries, which included five fours. Williams added 31 off 44 and first timer Mandy Mangru from Guyana looked settled with the bat, chipping in with 31 from 53 deliveries., which included three fours. Aaliyah Alleyne was not out on 23 with Mangru when their innings ended.https://platform.twitter.com/embed/Tweet.html?dnt=false&embedId=twitter-widget-0&features=eyJ0ZndfZXhwZXJpbWVudHNfY29va2llX2V4cGlyYXRpb24iOnsiYnVja2V0IjoxMjA5NjAwLCJ2ZXJzaW9uIjpudWxsfSwidGZ3X2hvcml6b25fdHdlZXRfZW1iZWRfOTU1NSI6eyJidWNrZXQiOiJodGUiLCJ2ZXJzaW9uIjpudWxsfSwidGZ3X3R3ZWV0X2VtYmVkX2NsaWNrYWJpbGl0eV8xMjEwMiI6eyJidWNrZXQiOiJjb250cm9sIiwidmVyc2lvbiI6bnVsbH19&frame=false&hideCard=false&hideThread=false&id=1395850808818814983&lang=en&origin=https%3A%2F%2Fwww.windiescricket.com%2Fnews%2Fsoogrim-takes-mohammed-xi-6-wicket-victory-over-matthews-xi%2F&sessionId=81edd4ffaecc4fb5aa32607260d5073fd67a8523&siteScreenName=windiescricket&theme=light&widgetsVersion=82e1070%3A1619632193066&width=550px

Bowling for the Mohammed XI, Soogrim, Joseph and Sheneta Grimmond finished with a wicket each.

In their reply Reniece Boyce and Britney Cooper looked set to take the game away quickly from Matthews XI. The pair came together for a 49-run first wicket partnership when Boyce was caught for 22 from 39 deliveries off the bowling of left-arm orthodox Kaysia Schultz. Vincentian, Japhina Joseph joined Cooper in the middle and the pair looked to continue the run-chase but Cooper soon after for 30 from 47 deliveries which included four fours.

Joseph and new batter Chinelle Henry looked set to achieve the victory with Henry striking a couple beautiful straight drives to the boundary. After the added 23 runs together, Joseph was the first of the pair to fall for 24 off teenaged left-arm medium pacer, Zaida James. Henry continued but consistently lost partners.

Soogrim joined Henry in the middle and did just what her captain required of her, supporting role to Henry then putting away the bad deliveries when they came. Henry was trapped LBW by Karishma Ramharack for 29 off 48 deliveries.

Soogrim then took to entertaining her teammate and coaches with some swashbuckling shots to the mid-on boundary and showing her soft touch with slices through the inner circle fielders. Needing 6 runs off the last over, she launched one through short mid-on to reduce the deficit to 2 off three. Victory came via a leg-bye off the bowling of Cherry Ann Fraser.

The West Indies Women head into their third week of the high-performance camp next week, as they continue to train and prepare for a return to international cricket in the coming months.