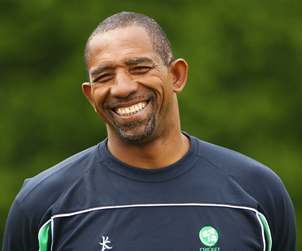 Coach of the West Indies cricket team Phillip Simmons has told young opening batsman Rajendra Chandrika that he has to understand that sometimes you fail, then to succeed.

Chandrika who made his debut in the Test against Australia which ended yesterday failed to score in both innings.

The right-hander got identical dismissals in both innings, driving at deliveries angled across him and getting caught at gully.

Chandrika got into the Test side after hitting 75 against the Australians, playing for the WICB XI in the warm-up clash at the Sir Viv Richards ground in Antigua.

He became the second West Indian in the history of Test cricket to collect a pair of “ducks” on Test debut.

The other was Jamaican off-spinner Alf Valentine who failed to score in both innings of the famous 1950 Test match against England at Old Trafford. Speaking on the fact Simmons said: There are two things that I said to him, he has to understand that many men made bad starts to their Test career and ended up being great players. In sports sometimes you have to fail to succeed. You look at Michael Jordan who was not good at the beginning of his career and ended up being great.

“The other thing he has to understand that is he can bat, or else he would not have been on the team. He has to keep that confidence in himself, correct his flaws and move forward in his career.”

Chandrika would take heart from the fact that Sri Lanka opener Marvan Atapattu who got one run from his first six innings, including two pairs and five ‘ducks’ and went on to play 90 Test matches, scoring 5,502 runs with 16 Test hundreds at an average of 39.02.

A total of 38 batsmen have been dismissed for a pair on their debut in Test cricket.