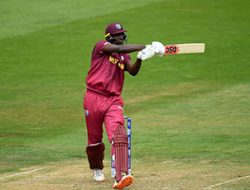 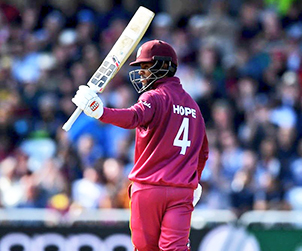 NOTTINGHAM, England – West Indies wicket-keeper Shai Hope spoke to members of the media after the team’s second match in the ICC Cricket World Cup at Trent Bridge. In a very close contest, West Indies were led by their bowlers who dismissed the Aussies for 288 off 49 overs. In their turn at the crease, West Indies ended on 273-9 off their 50 overs – just 15 runs short of victory.

Hope held four catches – the second match in a row – and then made a high-quality half century as West Indies came close to their second win of the tournament. He topscored with 68 off 105 balls with seven boundaries. Hope has now moved his tally this year to 664 runs (average 60). Overall in his career he now has 2,326 runs at an average of over 50 and strike rate of over 75 in 56 matches. The 25-year-old added 68 for the third wicket with left-hander Nicholas Pooran, who made 40 off 36 balls to follow up his 34 not out off 19 balls against Pakistan. The 23-year-old hit five boundaries and a six and played some eye-catching strokes all around the ground against both short and full length deliveries.

West Indies now have a 1-1 record in the tournament and are fourth in the points standings – following the impressive victory by seven wickets against Pakistan in the opening match last Friday. They now travel to Southampton to prepare for their third match against South Africa on Monday at the Hampshire Bowl.

Hope spoke about his brilliant one-handed catch to dismiss Usman Khawaja off Andre Russell, and an even more amazing running effort by Sheldon Cottrell on the deep midwicket boundary to end Steve Smith’s innings.

“For mine, it was just one of those things. I just had to go. I didn’t really have much time to think. Andre bowled a pretty decent delivery and I just saw the white thing and tried to catch it. Cottrell’s was easily the better catch, that was an amazing effort. At first I wasn’t sure if he had it but then I realised it was a proper catch,” Hope said.