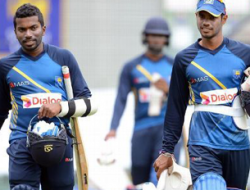 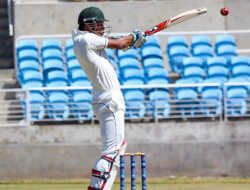 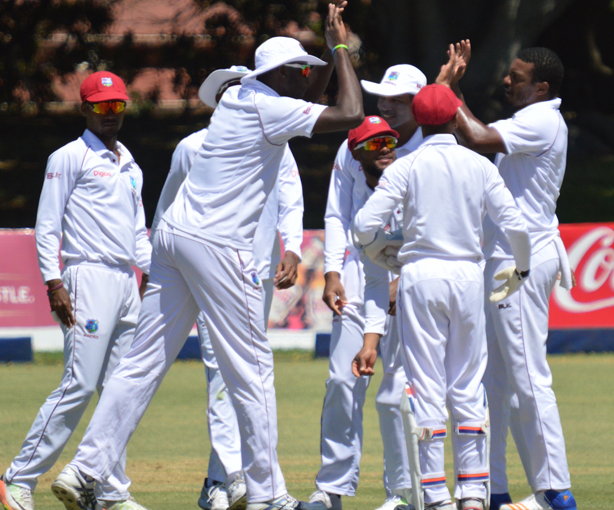 Zimbabwe’s battling rearguard secured a draw in the second Test at Queens Sports Club, but West Indies still took the series 1-0, their first Test series win under Jason Holder. Sikandar Raza‘s 89 and Regis Chakabva‘s 71 not out formed the backbone of their effort on the final day. Their obduracy was matched by Graeme Cremer, the captain, who blunted 150 deliveries for his 28 not out when both sides shook hands and settled for a draw at the start of the mandatory overs.

While the match ended very tamely in the afternoon, West Indies had been probing with both seam and spin for much of the day, with wickets shared around. But neither the old ball nor the new could prise a limpet-like Chakabva from the crease, and he added an unbroken 91 with Cremer to stall West Indies’ push for victory.

Chakabva played and missed several deliveries during the day and even ducked into a Holder bouncer that never got above waist height, but his defence held firm when it really mattered and bad balls were met with confident strokes. It had been eight innings – and almost three years – since he last passed fifty in a Test match, and this knock, which stretched on for almost 64 overs, will go some way towards securing his place in the side for their next Test against South Africa.

The hosts were also buoyed by Raza’s gritty innings, which stretched for more than five hours and 203 deliveries before he inside edged a Holder inswinger onto his stumps. During a brave, battling knock Raza survived an lbw decision given against him and a withering blow to the knee, cobbling together stands of 98 with PJ Moor, 28 with Malcolm Waller and 38 with Chakabva.

Much of his work with Moor came on Wednesday, and the pair had had added just four runs to their partnership when West Indies broke through almost first thing this morning. Holder positioned Shai Hope at gully, having noticed the angled bat that Moor was playing with. The plan worked to perfection, Moor guiding a length delivery straight to the fielder to depart for 42, Zimbabwe 144 for 5.

A nervous starter, Waller settled in against the quicks, but the introduction of spin quickly brought another wicket. Coming around the stumps and landing a ball in the rough outside leg, Bishoo ripped one across him and a tame poke presented an easy catch to Jermaine Blackwood at slip.

Zimbabwe were 172 for 6 when Waller fell an hour or so before lunch and the new ball was available, but as was the case in Zimbabwe’s first innings West Indies decided not to take it straight away. There was still significant movement and inconsistent bounce for the quicks, and the softening old ball also ensured that neither Raza nor Chakabva could get full value for all their shots.

Raza, who had survived a West Indies review in the morning, used a review of his own to reverse an lbw decision against him five overs into his partnership with Chakabva. Roach was by this time getting the old ball to reverse alarmingly, and hooped one past Raza’s hopping glance to strike him on the left knee roll. Roach bellowed an appeal, and Dharmasena gave it out almost immediately, but the review showed the ball missing leg stump. In the same over Roach snaked a waspish delivery in viciously to strike Raza on the inner knee. He was able to continue batting, but hobbled his way through to lunch.

At the other end, Chakabva opened his account from his 14th delivery, and swiped a brace of boundaries when Bishoo dropped short. He showed some uncertainty outside off stump against the genuine pace of Gabriel, but did enough to survive and keep stretching out Zimbabwe’s lead.

West Indies did finally take the new ball in the over before lunch, and Holder used it to break breach Raza’s defences just after the interval. Playing the wrong line to one that jagged in to him, Raza had his off stump disturbed. A window had opened for West Indies with Zimbabwe tottering at 210 for 7, with the better part of two sessions remaining.

But West Indies had used up all their reviews trying to get rid of Raza, and this detail gained crucial importance as the afternoon wore on. First, Cremer gloved a bouncer from Holder onto his shoulder, the chance being pouched by a leaping Dowrich, but the appeal was turned down.

Then, ten minutes before tea, Roston Chase zipped one in to Cremer’s pads, but the appeal lacked conviction and umpire Kumar Dharmasena wasn’t convinced. Replays showed three reds on the ball tracker. Moments before the tea interval, Chase once again struck Cremer on the pad, but again it was given not out and West Indies could do nothing about the decision.

Cremer made the most of the chances, soaking up well over 100 deliveries, and after tea it soon became apparent that the match was drifting inexorably towards a draw. Kraigg Brathwaite, Blackwood and Kieran Powell took over bowling duties from a tired attack, and with shadows lengthening the captains got together and decided to bring a hard-fought Test to an end.