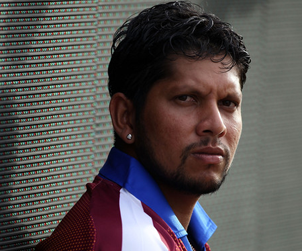 FORMER West Indies Captain Ramnaresh Sarwan has ruled himself out of playing for Jamaica Franchise for the upcoming regional professional cricket season.

Sarwan, 35, had expressed an interest in representing the franchise, but Courtney Francis, the chief executive officer of the Jamaica Cricket Association, confirmed that the Guyanese-born middle-order batsman has since made an about turn.

“The selectors would have had correspondence with players and Mr Sarwan’s correspondence came through chairman of selectors Wavell Hinds. He (Hinds) informed me that he is in receipt of an email from Mr Sarwan expressing regret that he is unable to attend our trial matches and our training based on commitments that Mr Sarwan has in Guyana,” Francis told the Jamaica Observer yesterday.

It is understood that Sarwan’s commitments are of a business nature.

Francis explained that as per the franchise’s guidelines, squad members are required to participate in physical assessments and trial matches.

“His commitments in Guyana would require his presence. It is very likely he will not participate for the franchise this year because, as part of the franchise rule, he would have to be here to do his physical, to do his medical, and to participate in our trial games. That (his absence) would eliminate him based on those criteria,” said the local cricket CEO.

Had he been selected for Jamaica, Sarwan would have been expected to be paid on a game-by-game basis. The stylish right-hander has been dogged by fitness concerns throughout much of his senior career with the West Indies.

He made his Test debut against Pakistan at Kensington Oval in Barbados in May 2000.

The batsman played the last of his 87 Tests against India in Barbados in mid-2011. He averages 40.01 with the bat and has a top score of 291 against England in 2009, also at Kensington Oval.

In 181 One Day International matches, he averages 42.67 and has scored five tons. His last ODI game came against India in the 2013 edition of the ICC Champions Trophy at Kensington Oval in London.

Meanwhile, the two non-Jamaican players contracted to represent Jamaica Franchise are Guyana’s Trevon Griffiths and Kirk Edwards of Barbados. They are expected to join the squad by next month.

“Kirk Edwards and Trevon Griffiths are the players to come in… and they are going to be joining us in another couple of weeks. There are some logistical things to be worked out and as soon as we get those things off the ground we will get those persons. We anticipate by mid-October we expect those guys to be here. They will participate in trial matches and do their fitness and medical,” Francis explained.

The coaching staff, consisting of Head Coach Junior Bennett and his Assistant Coach Robert Samuels, and the national cricket selection panel, are set to oversee a total of six trial matches. The first was played last week.

Another game is set to begin at Sabina Park tomorrow.

The second season of the Professional Cricket League (PCL) is scheduled to start November 6.

The Jamaica Franchise for the PCL will likely be officially called Jamaica Scorpions.