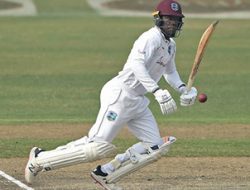 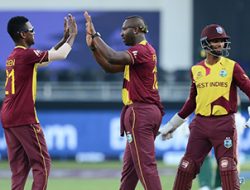 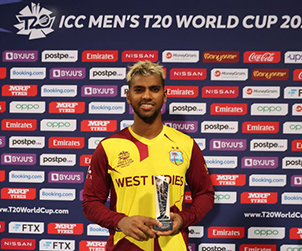 Andre Russell proved to be the man with the golden arm as his brilliant last over helped West Indies secure their first win of the ICC Men’s T20 World Cup. The defending champions beat Bangladesh by three runs in a thrilling contest that went to the final ball on Friday. Bangladesh needed 13 runs off Russell’s final over to collect their own first victory in the Super 12s, and it got down to requiring four off the last ball of the match.

Russell delivered a magnificent yorker to Mahmudullah, who missed it completely and the West Indies could celebrate. Bangladesh finished on 139-5, after West Indies made 143 off their 20 overs.

“He’s a big player and executed for us,” said keeper Nicholas Pooran after the match. Pooran was named Player-of-the-Match for his brilliant batting earlier. He was also stand-in captain for Kieron Pollard, who was off the field.

West Indies recovered from a slow start to post 142-7 in their 20 overs, with Pooran hitting 40 off 22 balls, which included four sixes – two which sailed over square leg and the other two down the ground.

A six off the final ball of the innings from Pollard proved important, too, with the skipper coming back to the crease in the penultimate over after retiring hurt. Jason Holder, in his first innings, also played well to make 15 not out off five balls with two sixes. Earlier, Roston Chase made a vital 39 off 46 balls on his T20I debut. He helped Pooran add a half-century partnership for the fifth wicket.

West Indies next match is against Sri Lanka next Thursday at the Zayed Cricket Stadium in Abu Dhabi. First ball is 6pm (10am Eastern Caribbean/9am Jamaica).