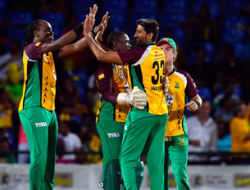 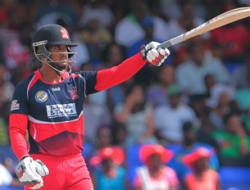 4th August 2016 Comments Off on ‘Roston showed why he should be playing Test cricket’ Views: 1251 News

Going into West Indies’ second innings at Sabina Park, Roston Chase, the batsman, was still an unknown to most cricket fans around the world; in his three previous Test innings, he had only managed a top score of 23. But while his unbeaten, match-saving 137 was a bolt out of the blue to most observers, it wasn’t to his captain Jason Holder, who spent the final session-and-a-half of the Test match batting alongside him.

“Roston is one of many things,” Holder said, at the end of the Test match. “He is a character. People don’t know Roston off the field but he is a fighter. I played all my cricket throughout my entire life with Roston – junior cricket, [Under-] 13, 15, 17, 19, West Indies A and now West Indies senior team. I have honestly enjoyed playing with Roston because, the character he is, and you know the way he plays cricket.

“He is a very good fellow, he may come across lackadaisical and lazy and smooth but he is a wonderful individual. It’s nothing new to me, to see this kind of performance from Roston, because I know what he can offer, and credit to the selectors for having the faith in him and giving him the opportunity. Credit also must go to Roston for showing why he should be playing Test cricket.”

Chase batted through all of day five, putting on 93 with Jermaine Blackwood for the fifth wicket, 144 with Shane Dowrich for the sixth, and an unbroken 103 with Holder for the seventh. West Indies only lost two wickets, and got on top of India for the first time in the series.

“We got a really good partnership from Blackwood and Chase at the beginning of the day,” Holder said. “That set up the game for us, laid the foundations for the entire day. Then Shane Dowrich came out and played an outstanding knock, tough luck to be given out at that stage [adjudged lbw despite inside-edging the ball], but I thought his partnership with Roston was very, very crucial, and I just came out and continued to focus and made sure I was there at the end.

“I think a lot of credit must be given to Roston. To come in his second Test match and play the way he did, in these circumstances, full credit to him. I just hope he continues on in this vein. He knows that this is just the start, and hopefully he can have a long-lasting career for the West Indies.”

While West Indies could take a lot of positives from the Test, including the effort of the bowlers to keep India’s scoring rate down even as they piled up 500, Holder said it was important for them to build on this performance and not revert to old ways.

“At the beginning of this game, as I said in the press conference, it’s all about improvement for us. It’s a young side, I don’t want to expect leaps and bounds from this group so soon, but it’s just important that we continue to improve.

“We think, with a performance like this, it’s important we don’t fall back into old habits, that we just don’t take two steps backwards. It’s important we just keep looking for ways to improve. I asked the bowlers to be a lot more patient in this Test match. I think the bowlers did an outstanding job.

“Although we didn’t get the wickets that we were looking for, I think the pressure was there, we sustained the pressure throughout the entire innings, and that was really good for the bowlers, and the second innings just shows what we can do when we put partnerships together, and just build something. I think in the beginning of our innings it’s quite tough, we tend, more often than not, to give our wickets away, but it just shows that when we apply ourselves and fight, we can get big partnerships together.”

Even though West Indies started the day 48 for 4, still 256 runs short of making India bat again, Blackwood came out and played his shots, hitting on the up and over the top, and scored a 54-ball 63, his second half-century of the match. Blackwood had experienced a run of poor form leading up to the match, and Holder, who kept faith in him despite calls for him to be dropped, said he had told him to play his natural game.

“I think it all boils down to the situation of the game, and also the particular player,” Holder said. “You know the nature of Blackwood, if you watch Blackwood playing in Test-match cricket, you know he’s a free-scoring player, he’s a player who likes to hit balls over the top, off the fast bowlers, likes to punch the ball, likes to keep the scoreboard moving on.

“At the beginning of this game I stressed to him that he needs to be himself, I just encouraged him to be himself and play his game, play the game he knows to play, and I was really really proud of him, the way he came out and played in the first innings.

“You know, after we lost a few early wickets, he just came in and he just played his game, freed up things a little bit more, showed the batsmen, yes, [instead of just hanging around, if we] put the fight to the Indians. So I just think it boils down to the particular batsman, the way he wants to play, and also the situation of the game.”

Last year in Antigua, Holder had scored a final-day hundred to save a Test match against England. He said he had been thinking about that match while batting here.

“You know, when I was batting I was thinking about the same Test match against England,” Holder said. “It was a similar scenario. And for me, I just adopted the same mentality I adopted back then. I was not going to give my wicket away. I felt early on in the innings I was a bit fidgety, not very settled. I knew at that stage I had to buckle down.

“[Mohammed] Shami bowled an outstanding spell up front with the second new ball. And I thought if I got past that phase it was a lot easier to bat. Having said that, I offered a loose stroke outside off stump and got away. You need fortune in the game. After that I really buckled down and allowed the bowlers to come to me.”

In the first innings, R Ashwin had picked up a five-wicket haul, his second of the series, as West Indies folded for 196 after choosing to bat first. In the second, he only managed one wicket in 30 overs.

“Obviously the Ashwin factor is a big factor,” Holder said. “He’s a quality offspinner, his record speaks for itself, but I just thought we negotiated him well today. When we got the chance to attack him, we did, tried to put him under pressure and just tried to manoeuvre the field the way we wanted the field to be. Credit must go to our guys that we put up our hands today and really batted quite well.”

“And India is a quality team, no doubt, you know, and their spinners are quality on these kind of pitches. I just think it’s important, as I keep stressing, for our guys as a young group to keep improving. It’s important for a guy like Roston, coming off a top knock like this, to continue on in this series and continue being consistent. We’ve struggled with consistency, both with the bat and ball, and I just think going forward we need to be more consistent, and that will bring improvement.”

While the batsmen occupying the slots between No. 5 and No. 8 all got half-centuries – only the fifth time this had happened in all Test cricket – West Indies’ top order collapsed for the second time in the match. Holder said he still had plenty of faith in Darren Bravo and Marlon Samuels at No. 3 and No. 4.

“You know you need partnerships up front,” Holder said. “It’s very, very important to get partnerships up front. In our last Test tour, Darren Bravo led the way. He hasn’t fired so far in the series but full confidence in him. Darren’s record speaks for himself. And he is a quality player. He just needs to get us that start. Once he gets that start I think he will lay that foundation for us.

“Marlon showed some glimpses in Antigua of what he can do. And I thought Marlon’s knock on the first day was an outstanding knock. He only got 30-odd but he took some time out of the game. He absorbed a lot of pressure for the rest of the guys to come. And I thought that was a real positive senior guy’s knock. It’s just a matter of clicking, for the guys to come out, being solid and fighting it out early. It’s not going to be easy early on. Test cricket is not supposed to be easy but once we show that fight, again you will see what happens.”