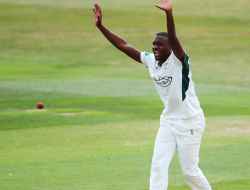 15th September 2016 Comments Off on Relationship between Phil Simmons and WICB was never going to last Views: 1342 News

Relationship between Phil Simmons and WICB was never going to last

Under normal circumstances, the removal of the coach of an elite sports team is not that big a deal. The tenure of coaches in professional sports is notoriously short.The removal of West Indies head coach Phil Simmons on Tuesday (September 13), however, after such a brief stint, is further manifestation of the incessant turmoil that has long seized West Indies cricket.

According to reports, the decision was made at the board of directors meeting last weekend. “In recent times, based on the public pronouncements of the coach and the approach internally, we have identified differences in culture and strategic approach. The WICB would therefore like to thank the coach for his contribution and wishes him the best in his future endeavours.”

Appointed to the post after the 2015 World Cup, the Trinidadian’s relationship with his employers was problematic from its early stages. Irked by what he termed as “interference from outside” in the selection process prior to last year’s visit to Sri Lanka, Simmons angrily aired his feelings. The coach explained that he, then chairman of selectors Clive Lloyd, and captain Jason Holder, were intent on availing the team of the services of Dwayne Bravo and Kieron Pollard for the One-Day International leg of the tour. And despite importunately delivering pleas for the two players, they (himself and Lloyd since Holder doesn’t have a vote) were outvoted by the other three selectors, Courtney Walsh, Eldine Baptiste and current chairman, Courtney Browne.

At a press conference in Barbados on September 25, 2015 Simmons vented: “The disappointing fact is that you can lose 3-2 in a vote-off but there is too much interference from outside in the selection of the ODI squad and it’s disappointing for me to know that in any aspect of life … [people would use] their position to get people into a squad; or in this case, get people left out of a squad. It is wrong and I don’t like it and that is my beef with the selection of the ODI team.”

On its face, this seems nothing more than the normal selection method at work. Simmons’s accusation that some of his colleagues succumbed to arm-twisting from external forces not only reflect poorly on those he claimed did the coercion but also on those who succumbed to it. The other selectors made no public pronouncements at the time but it is tough to imagine them being pleased with the coach’s utterances.

Suspended for his outburst, Simmons missed the 2015 Sri Lanka tour. A reprimand by the board and Simmons’s public apology presaged him taking the reins once again in November 2015. “I extend a public apology to all whom I may have offended, I have personally apologised to my fellow selectors and the West Indies Cricket Board and now do so again publicly. I am looking forward to putting this behind me and doing the job I enjoy with the West Indies senior men’s teams, to continue heading towards the goal that we have in sight and towards which we have started working.”

And yet Simmons and the board never seemed able to patch things up and so the relationship remained frayed. Given some of the views he expressed, the eligibility rules among them, and given the running battles, almost like guerilla warfare, being fought between the administrators and players like former captains Darren Sammy and Dwayne Bravo, who have not been reluctant to take public shots at the board, Simmons might have been seen to be firmly ensconced in the camp of those who stand in opposition to the board. Rather than aligning himself with those tasked with the governance of West Indies cricket, Simmons was likely perceived as part of an insurgent group, highly dissatisfied with how the game is administered in the Caribbean.

Making judgments based on public interactions can be unreliable but the 53-year-old looked to have a great rapport with the players he coached. They appeared to be comfortable in his company and he in theirs. Even more than that, there were heartfelt expressions of delight when he was reinstated last year and expressions of acute disappointment recently when he was separated from his post.

“It means a lot to have him reinstated. We’re very happy,” Bravo said in November last year. “We heard the news this morning. A lot of us feel a weight is off our shoulders. It’s good for West Indies cricket. It’s good that he’s back. The team enjoys Phil being the head coach.”

Sammy wrote the following on his Facebook page when he learned of Simmons’s sacking: “So after the publicity stunt in Fort Lauderdale the first so call plan to move West Indies Cricket forward is to Fire the Coach just 2days before a tour. Just prove to me what I already knew. If the blind leads the blind they are bound to fall in a pit.” [sic].

On Twitter, Pollard referred to the news of the coach’s firing as being “very disappointing.” The powerful batsman also implored his countryman to “Keep your head up u will be missed MOST DEFINITELY.” [sic].

From the standpoint of West Indies cricket, it’s a pity Simmons and the board never managed to establish that kind of trust and warmth. This was his take on his relationship with the board’s director of cricket, Richard Pybus in April: “Relationship is a difficult word. He communicates via emails but he has not spoken to me since the suspension. It’s sad because this is not about him or me, this is about West Indies cricket. There has not even been any personal or team congratulatory message on the World Cup win.”

And what of his relationship with board President Dave Cameron? “It is the same thing,” said Simmons. “It was good when I first came in. I would get the occasional text message and I earned a big hug when we won the Test match in Barbados [against England], but since my suspension there has been no communication, not verbal nor written, and again no congratulatory message.”

It has therefore long been clear that the relationship between coach and board was tenuous and destined to be brief. There were just too many stresses and strains. It was never going to survive.