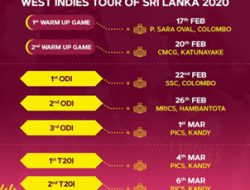 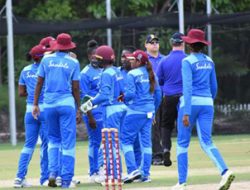 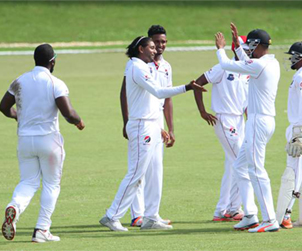 Muhammad and Hinds exploited a green-top Kensington Oval pitch to lead the Red Force attack and the Pride were dismissed in their first innings about half-hour before the close on the first day of fifth round matches in the Championship.

Hurricanes 215-9 vs Scorpions at the Trelawny Multiplex

Warde was unbeaten on 53 and Hodge held the top order together with 52, after the Hurricanes chose to bat in the first Championship match being played at this venue in 11 years.

Harty exploited the conditions and captured 4-41 from 22 overs to put the Hurricanes batting under pressure throughout the day.

The visitors could only string together a series of tidy partnerships with their biggest stand of 39 between Hodge and Trinidadian left-hander Amir Jangoo, one of the Hurricanes draft choices.

Jangoo made 35, but no other Hurricanes batsman reached 20, as they collapsed from 127 for four to 146 for seven before Warde anchored successive stands with Jamaican Damion Jacobs, the other Hurricanes draft choice, and Nino Henry.

Greeted by helpful conditions, the lanky Muhammad grabbed 3-47 from 11 overs and Hinds took 3-51 from 15 overs to upstage their Barbadian counterparts.

After the start was delayed by half-hour because of wet conditions caused by rain, Red Force put the Pride on the back foot, after the home team chose to bat.

reducing them to 47 for six inside the first hour after lunch.

Kevin Stoute led a rearguard for the Pride, however, hitting the top score of 53, Ashley Nurse made 48 and West Indies pacer Kemar Roach added 38 to add some beef to the total.

Stoute and Roach combined for the most stable period of the innings, putting on 87 for the seventh wicket.

Pride’s pacers failed to get the same response from the pitch and Red Force made a steady start before bad light stopped play.

Former West Indies Under-19 World Cup-winning fast bowler Chemar Holder took his 20th scalp for the season, when he claimed opener Joshua da Silva lbw for 13, the only wicket the visitors lost in close to 1-1/2 hours before stumps were drawn.

Volcanoes 210-6 vs Jaguars at the National Cricket Stadium

Permaul, the leading bowler so far this season, took 2-39 from 26 overs and Bishoo bagged 2-43 from 16 overs, but several Volcanoes batsmen got starts without carrying on.

Keron Cottoy has led the way so far with 37 not out, Devon Smith supported with 35, Guyanese Bhaskar Yadram, one of the Volcanoes’ draft choices, scored 30, Kavem Hodge added 29 and Andre Fletcher got 27.

There were no significant partnerships for the Volcanoes, after they were put into bat.

But stands of 44 between Hodge and Fletcher for the third wicket, and 46 for the sixth wicket between Cottoy and Emmanuel Stewart stabilised the batting.