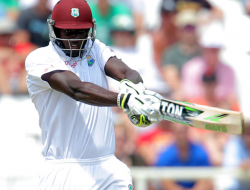 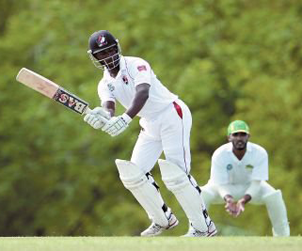 Another stuttering start by the T&T top order and more solid batting from Guyana led by veteran Shivnarine Chanderpaul left T&T with all to do heading into today’s final day of the West Indies Cricket Board Professional Four-Day Cricket League at the Queen’s Park Oval in Port-of-Spain.

T&T lost the wickets of Jeremy Solozano (one) and Yannic Cariah (16) late yesterday to leave the home team on 51/2 in the second innings, still trailing Guyana by 214 runs. At the crease for T&T is Kyle Hope on 22 and Narsingh Deonarine on ten.

Earlier, Guyana continued where it left off on Saturday strolling to a mammoth 475 all out behind a century from Assad Fudadin and half centuries from Chanderpaul, Christopher Barnwell and Raymon Reifer.

The T&T players seemed to be going through the motions, hoping for the Guyanese batsmen to make mistakes.

Chanderpaul, who only posted one half century for the season before yesterday, made a solid 82 off 182 balls, lashing seven fours. Fellow left-hander Assad Fudadin got to 102 after being unbeaten on 94 overnight. Fudadin’s fifth first class century comprised 257 balls with seven fours and two sixes.

However, the partnership that took the match away from T&T was a 124-run sixth wicket partnership between Barnwell and Reifer. The pair was never under pressure, assisted by some indisciplined bowling from the home team. The spin duo of Imran Khan and Kavesh Kantasingh, who have both had solid performances this season, failed to make an impact.

Desperate for a wicket T&T captain Jason Mohammed brought on leg spinner Yannic Cariah for Kantasingh but that move also proved futile. Mohammed used eight bowlers. After posting his half century, Barnwell increased the scoring rate punishing Cariah for some short bowling as the T&T players looked like a lost bunch.

After Guyana got to 442/5 at tea, T&T got a welcome spark from part time spinner Yannick Ottley bowling his first spell of the match. In quick succession Ottley got the prized wicket of Barnwell for 79 off 98 balls (11 fours) caught in the covers, then dismissed Anthony Bramble (duck) and Ronsford Beaton (two). Reifer was stumped for 64 off 184 deliveries (five fours) off Deonarine as Guyana was reduced to 458/9.