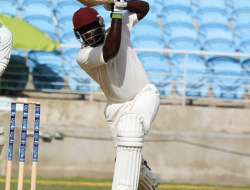 T&T Red Force was brought right down to earth after their emphatic win against the Windwards in the team’s opening encounter, by a brilliant performance from the Barbados Pride unit on the fourth and final day of their Digicel Professional Cricket League clash at the Queen’s Park Oval, yesterday.

Chasing an improbable 392 runs to win the clash, the host started the final day on 57 for three and capitulated for an embarrassing 99 all out – to lose the match by 242 runs with two sessions to spare.

Requiring another 335 runs to win and three sessions to get the required runs, Red Force, would have been looking skywards for assistance, but even the Gods were against them, as the rain did not come down to save them.

Resuming the day on 57 for three, Red Force lost their last six wickets for 42 runs – with opener Jeremy Solozano again unable to bat because of illness.

Other than Kyle Hope (26) and Yannic Cariah (25) who perished on Sunday’s third day, no other batsman made it into double figures.

Pride were forced to wait until the eighth over of the morning before finding success when Roach had captain Yannick Ottley, yet to score overnight, caught at the wicket for two with the score on 64.

In the very next over, left-arm spinner Jomel Warrican had nightwatchman Marlon Richards caught at bat-pad for seven without any addition to the overall score, to leave Red Force reeling.

Debutant Jyd Goolie spent 46 minutes and 26 balls before he was bowled by Stoute who struck again in his next over by removing Roshon Primus to a catch at the wicket for two, at 80 for seven.

Wicketkeeper Steven Katwaroo held out in the deep off pacer Justin Greaves for eight before lunch as the Red Force innings lay in ruins at 99 for eight at the interval.

And Roach applied the finishing touches immediately following the break when he bowled Jon-Russ Jaggesar for three.

For their efforts, Pride took away 18.4 points while Red Force mustered four.

T&T will now lick their wounds and come calling again on Friday, when they tackle the Leewards Volcanoes, again at the Queen’s Park Oval from 10 am.

I Khan c Rampersaud b Roach 0

S Cottrell not out 8

Man of the match: Anthony Alleyne.