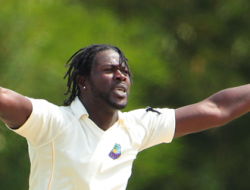 Jones was unbeaten on 52 and Carter made 46, as the Pride, set 248 for victory in a minimum of 30 overs, reached 117 for four in their second innings when stumps were drawn on the final day of their first-round match at Kensington Oval.

Jangoo led the way with 63, Nicholson hit 55, his second half-century of the match, and Ramdin followed up his first innings hundred with 56 not out to make him a shoo-in for the Player-of-the-Match award on his return to the Regional 4-Day scene for the first time in three years.

Barbados-born fast-medium bowler Roshon Primus sent shivers through the dressing room of the Pride when he had Shayne Moseley caught at long-leg for three from a top-edged hook and fellow left-handed opener Anthony Alleyne was caught behind for the same score off successive deliveries in the second over.

When wicketkeeper/batsman Mario Rampersaud was lbw for a duck, offering no stroke to a delivery from Marlon Richards, the Pride were 15 for three, but Carter arrived to ease their nerves with an 87-run stand with Jones.

When Carter was bowled for 46 playing forward to a delivery from off-spinner Bryan Charles, Jones was 46 and he duly reached his 50 to bring the match to a close.

Earlier, Red Force started the day on 31 without loss, choosing discretion as the best part of valour as their top order batted resolutely to put them in a secure, if not match-winning position.

The breakthrough came when Jeremy Solozano, pushing forward, was caught behind for 34 off Pride captain Kevin Stoute, bowling his medium-fast stuff, and part-time off-spinner Kenroy Williams had Jangoo caught down the leg side to leave Red Force 99 for two.

Nicholson anchored a 57-run stand for the third wicket with Isaiah Rajah which carried Red Force past 150 before two wickets in three balls left them 156 for four.

West Indies off-spinner Ashley Nurse bowled Rajah for two and had Tion Webster caught at leg-slip from a sweep.

Nicholson got together with Ramdin to add 50 before he was caught at extra-cover off left-arm spinner Jomel Warrican, leaving his captain and Primus to belt 52 from 49 balls in an unbroken sixth-wicket stand before the declaration.

Red Force face Jamaica Scorpions in the next round, starting at the Brian Lara Cricket Ground on Thursday in Trinidad.

Pride have just two days to prepare for their next match against Leeward Islands Hurricanes, starting on Wednesday at Kensington Oval in Barbados, where a rest day has been scheduled following the second day, due to a state funeral for former Barbados Governor-General, Sir Clifford Husbands.