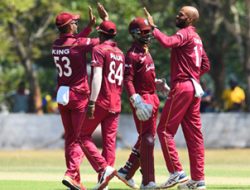 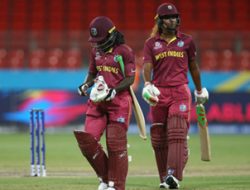 Taylor Injured As West Indies Bow Out Of T20... 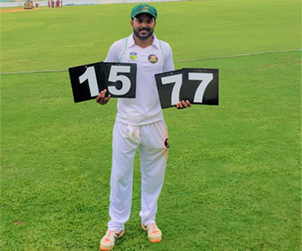 1st March 2020 Comments Off on Permaul’s Best Takes Jaguars To Win Over Scorpions; Pride Within Scent Victory Over Volcanoes; Cornwall Brings Hurricanes Back Into Contention Against Red Force Views: 682 News

Permaul’s Best Takes Jaguars To Win Over Scorpions; Pride Within Scent Victory Over Volcanoes; Cornwall Brings Hurricanes Back Into Contention Against Red Force

ST. JOHN’S, Antigua – Veerasammy Permaul wrecked Jamaica Scorpions’ batting for the second time in the match with a career-best spell and set up five-time defending champions Guyana Jaguars for an emphatic seven-wicket win in the 2019-20 West Indies Championship on Saturday.

The diminutive left-arm spinner captured 8-18 from 11.4 overs to propel the Jaguars to a morale-boosting victory, after they bowled out the Scorpions in the final hour before the scheduled close on the third day of sixth round matches in the Championship, and quickly knocked off a modest target.

And, West Indies off-spinner Rahkeem Cornwall signalled he was close to being back to his very best with an incisive spell that brought Leeward Islands Hurricanes back into their contest against Trinidad & Tobago Red Force.

Permaul ended the match with 15-77 – the second-best match figures in the modern era of domestic West Indies first-class matches (1966 onwards) – making him a shoo-in for the Player of the Match award and carried his tally of scalps for the season to 45.

No such finish appeared on the cards, when Scorpions captain John Campbell, the West Indies opener, cracked a typically flamboyant 66 and was busy dominating a first wicket stand of 75 with Alwyn Williams.

Once Permaul bowled Williams with his second delivery however, the Scorpions batting unravelled and the hosts lost their remaining nine wickets for 26 in the space 20 overs with off-spinner Kevin Sinclair securing 2-26 from 13 overs to complete the demolition.

Set 24 for victory, the Jaguars reached their target, but off-spinner Jamie Merchant claimed 3-8 from 4.4 overs before Christopher Barnwell hit the winning run to give the Jags their first victory in three matches.

Earlier, Scorpions pacer Marquino Mindley wound up the Jaguars first innings, after they resumed from their overnight total of 287 for six.

After rain restricted the morning period to two overs, Merchant removed left-hander Vishaul Singh for his overnight 93 with the second ball of the day.

Mindley followed up with the scalps of Permaul, Sinclair and Nial Smith and finished with 3-68 from 23.2 overs, but he could not prevent the Jags from claiming another batting point.

Roach bowled Volcanoes captain Kavem Hodge for a duck in his first spell from the Joel Garner End and had the prized scalp of Andre Fletcher caught at mid-on for four in his second spell from the Malcolm Marshall End to hurt the visitors run chase.

In between, pacer Keon Harding had Roland Cato caught behind 22, but long-serving left-handed opener Devon Smith, not out on 16, batting at five because he had spent time off the field earlier in the day and emerging batsman Alick Athanaze, not out on 21, batted through 45 minutes before the close to keep the Pride attack at bay.

Earlier, Mayers followed up his first innings 140 with a whirlwind, unbeaten 62 and was one of three batsmen that got half-centuries to lay the groundwork for the Pride to make a declaration about 1-1/4 hours before the scheduled close.

Left-handed opener Shane Moseley supported with 60, Justin Greaves was not out on 53 and Pride captain Kraigg Brathwaite, the West Indies opener, made 49.

Moseley and Brathwaite completed a 114-run stand for the first wicket, after the Pride resumed from their overnight total of six without loss.

They were two of batsmen dismissed, as Hodge, bowling his left-arm spin, and pacer Ray Jordan took two wickets apiece and Pride stumbled to 135 for four in between a few stoppages for rain.

But Mayers came to the crease and punished his former teammates, dominating a stand of 104 –unbroken – for the fifth wicket which hastened the Pride to their declaration.

Cornwall collected 5-29 from 17 overs and triggered a Red Force second innings batting collapse that has now set up an intriguing final day.

The visitors, leading by 36 on first innings, were counting the cost, after Cornwall destroyed their top-order batting.

A defiant 45 not out from Joshua da Silva and 29 from long-serving, leg-spin bowling all-rounder Imran Khan saved Red Force from complete ruin with a stand of 53 for the sixth wicket.

Part-time pacer Devon Thomas bowled Khan just prior to the close to end the day on a high note for the hosts.

Hurricanes had earlier shown defiance of their own, after they resumed from their overnight total of 147 for five.

T&T-born left-hander Amir Jangoo, a Hurricanes draft choice, fell for the top score of 90, after adding just 18 to his overnight score, and with Jaison Peters completed a 63-run, sixth wicket stand.

Peters made 21, but Nino Henry added 34 and Jeremiah Louis got 29 to frustrate the Red Force with a ninth wicket stand of 53 before Khan claimed them both to wrap up the innings and end with 4-67 from 32 overs.