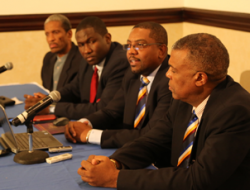 The spin duo of Veerasammy Permaul and Devendra Bishoo took 18 wickets between them to bowl Guyana to a five-wicket win – their seventh from eigth games – over Jamaica. Left-arm spinner Permaul grabbed five-wicket hauls in both innings to take his fourth first-class ten-for. Legspinner Bishoo picked up four in each innings as Guyana came back after conceding a small first-innings lead.

Jamaica were dismissed for 258 after choosing to bat, with fifties from Jermaine Blackwood and Chadwick Walton after opener John Campbell made 48. They were 185 for 3 at one stage before losing their last seven wickets for 73.

Rajindra Chandrika (69) and Leon Johnson (78) took Guyana to 136 for 1 but the side collapsed as well to be bowled out for 236. Legspinner Damion Jacobs claimed 5 for 67 and Guyana were also hurt by three run-outs.

Jamaica lasted 40.5 overs in their second innings. Only Blackwood (47) managed to make more than 30 as Jamaica slumped to 138. Guyana were reduced to 42 for 3 in their chase of 161 but fifties from Johnson and Vishaul Singh put them on their way to victory.

Jomel Warrican singlehandedly spun Barbados to a nine-wicket win over Leeward Islands. The left-arm spinner took eight wickets in the first innings and five in the second as Leewards were bowled out for 215 and 150. Shane Dowrich’s century took Barbados to 353 in their first innings, leaving a tiny chase of 13 which was completed in four overs.

Kyle Corbin (75) provided the start for Barbados but they were reduced to 160 for 5. Dowrich and Kevin Stoute (63) revived the innings with a 108-run partnership. Dowrich added 60 more with Ashley Nurse as the innings stretched to 119 overs.

Miguel Cummins struck thrice to have Leewards reeling on 22 for 4 before Montcin Hodge (37) and Cornwall (53) steered the score to 100. Warrican took over now, removing the next four batsmen in quick time as Leewards crumbled to 111 for 9. Gavin Tonge clubbed 33 off 21 to make sure an innings defeat was avoided. Warrican had him stumped to end on 5 for 50.