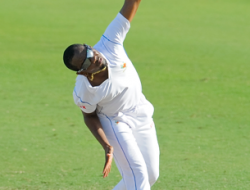 After being outplayed in both bowling and batting departments in the first Twenty20 International against Pakistan, West Indies will be eager to go out and justify its tag of world champions in the T20 format in the second game at the Dubai International Cricket Stadium on Saturday (September 24)

The nine-wicket defeat in the first game will rankle and West Indies will need a win to keep the three-match series alive. For that to happen, it will need to first find a way past Imad Wasim, the left-arm spinner who emerged as a hero for Pakistan with stunning figures of 5 for 14.

The only positive for West Indies in the last game was the batting of Dwayne Bravo, whose gritty half-century saved West Indies the blushes after being 48 for 8 and took the side to 115. Only Bravo and Jerome Taylor managed to get into double digits in the West Indies innings, the duo putting on a record 66-run partnership for the ninth wicket, but if the visiting side is to be competitive it will need much more from its top order.

West Indies certainly missed the services of Chris Gayle, Lendl Simmons and Andre Russell — all three are unavailable for the tour — but the No. 3 side in the International Cricket Council T20I rankings has enough firepower to still make a difference.

Carlos Brathwaite, the West Indies captain, didn’t feel the side needed to curb its attacking instincts, but demanded more game awareness from his wards. “We are an aggressive exciting team, when it comes off it looks fine, but you have days like these when it doesn’t come off,” he stated on Friday. “There is no blame to point, we had a slow start and we lost the game. We keep our chin up, move forward, and look ahead to tomorrow’s game.”

Meanwhile, Pakistan will be hoping for another dominant performance with a chance to take an unassailable 2-0 lead in the series. Though it was Imad who set up Pakistan’s victory by restricting West Indies to a modest total, Babar Azam (55 not out in 37 balls) and Khalid Latif (34 not out in 32 balls), too, played their roles to perfection.

What was also apparent was a greater emphasis on fielding and Sarfraz Ahmed, the Pakistan captain, was quick to acknowledge the work behind the scenes. “Everyone is working on their fitness,” he explained. “We had a fitness test just before this tour, our fitness has improved a lot. We’ll soon have the same standards as international standards.”

Pakistan has now defeated both the ICC World T20 finalists — West Indies and England — in back-to-back victories. The ball is now in West Indies’ court to show the first match was an aberration, while the home side will be keen to prove otherwise.